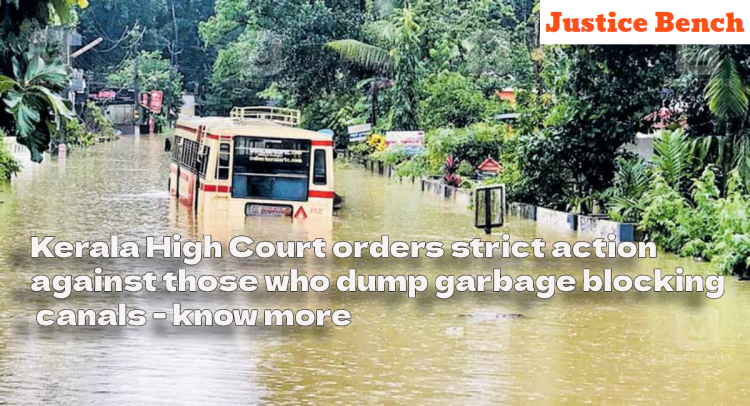 The Kerala High court in Treasa KJ v State of Kerala case stated Considering the relentless rain that Kerala has witnessed this past week and the resultant flooding, the Court took up the case raising the issue of blocked canals, on an emergent basis.

On Thursday the Kerala High Court in the case of Treasa KJ v State of Kerala directed the authorities to take strict action against those who dump garbage into canals and drains, exacerbating the flooding of roads in the State.

The Bench Comprising Justice Devan Ramachandran directed the Secretary of the Cochin Corporation to ensure strict action is taken against those dumping garbage and causing blockage of drains.

“The secretary of the corporation is put on notice by the court, that every necessary and effective measure shall be initiated and ensured on a war footing, from this moment, for onwards persons, who violate the directions of the corporation as mandated by law against the deposit of garbage, into the canals shall be taken to task under the fullest warrant of law, to make it deterrent against others, who may be under the wrong impression that such activities will be tolerated,“

the Court said in its order.

Further, the Court directed the Corporation to advertise the measures that would be taken to make citizens aware of their duties.

“Steps like fencing the canals would be of no effect unless the citizens understand that it is their duty to ensure that such facilities are maintained well, and kept free of debris, which otherwise would challenge the lives of many other affected by the flooding. It will therefore certainly be in the interest of all stakeholders that the corporation give necessary advertisements and publicity to such imperatives through all methods as available,“.

A petition was filed in the year 2018 regarding the blockage of the Perandoor canal within the Cochin Corporation resulting in the inundation of roads.

The Court had passed various orders over the years in the case to control the management of the drains of flood mitigating systems of the city on a regular basis.

“Operation Breakthrough” was one measure that was implemented in the past few years to clear up the extensive canal network that lay across the city. However, the third phase of the operation is still in progress and unfortunately could not be completed.

Considering the relentless rain that Kerala has witnessed this past week and the resultant flooding, the Court took up the case today, on an emergent basis.

The court directed the head of the operation breakthrough team to file reports along with statements enumerating the steps taken and to be taken with respect to the flooding situation that residents of Cochin witnessed earlier today.

“The reports shall be comprehensive, so that the court can issue orders to ensure that such events are as far as it is practically possible, averted during this monsoon season, which is at our doorstep already,“.