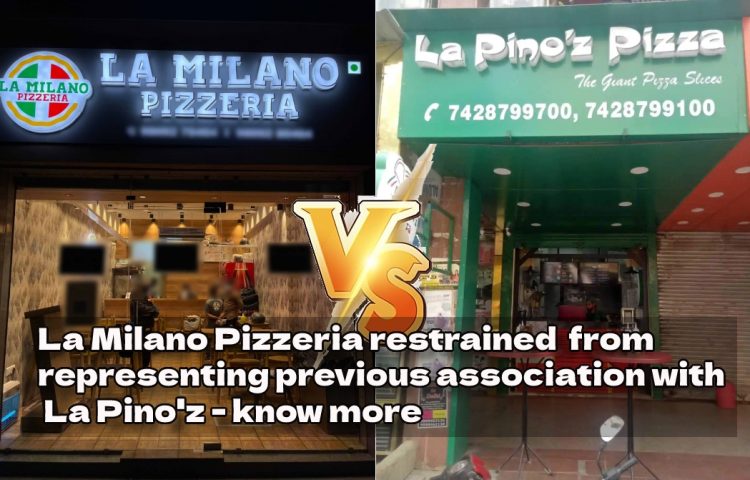 The Delhi High Court bench comprising Prathiba M Singh in the case of Copenhagen Hospitality & Retails v. MS AR Impex & Ors stated that La Milano or its franchisees have no right in law to represent to the consumers that its outlets are in any manner associated with La Pino’z Pizza.

The Bench Comprising Justice Prathiba M Singh observed that there exists a conscious need to ensure that no confusion is perpetuated due to the earlier association of the defendants La Milano with the plaintiff La Pino’z as its franchisee.

The order stated that ever since the beginning and post the COVID-19 pandemic. the manner in which food is sold has undergone a considerable change with the advent of the internet.

“While visiting food outlets was the usual norm, in recent times, substantial sale of food products is made through online delivery services. For the said purposes, the consuming public uses the reviews on Facebook pages, Instagram pages and other social media platforms. Other communication means such as messenger services also play a very crucial role as the consumer is no longer visiting the outlet in order to be able to distinguish between the earlier name used and the new name adopted,”

The pretext of the case, A suit was filed by Copenhagen Hospitality & Retails, the owner of La Pino’z Pizza, alleging a breach of injunction orders on the part of the owners of La Milano.

The owner of La Milano was the ‘master franchisee’ of the plaintiff in Gujarat. However, the relationship between the two broke, after which La Milano started its own pizza outlets.

La Pino’z sought an extension of the same injunction to one of its erstwhile sub-franchisees, which has now been taken over by the owners of La Milano.

The main contention of the plantiff is that the sub-franchisee at Rajendra Nagar, Delhi, continues to use the same Facebook profile, Instagram page, email etc, which were in some manner or the other linked with La Pino’z.

The Court observed while understanding the manner in which search engines, and social media platforms function shows that the historical data is always linked to the earlier name.

The Court directed La Milano that any such usage either on WhatsApp or on any other social media platform be immediately deactivated or deleted.

the Court ruled also ruled that While restraining La Milano from representing to the public that it had any association or connection with La Pino’z Pizza,,

“Accordingly, it is made clear that the Defendants or its franchisees would have no right in law to represent to the consuming public that its outlets under the name “LA MILANO PIZZERIA” are in any manner associated or connected in the past, with “LA PINO’Z PIZZA”. The name “LA PINO’Z PIZZA” shall also not be used by them in any manner whatsoever. Any such usage either on WhatsApp or any other messenger service as also social media platforms, shall be immediately deactivated/deleted by the Defendants and/or its franchisee.”

Accordingly, the Court stated that La Pino’z was free and at liberty to ask third-party directory listings which connect it to La Milano to take delist the same.

Subsequently order, the Court directed La Pino’z to take down any derogatory remarks, comments, and exchanges on social media, where they had referred to La Milano as their ‘cheap imitation’.

La Milano was directed to honour its undertaking dated February 22 – wherein the franchise had agreed to deactivate its Facebook and Instagram pages, and not to use delivery bags, sachets of chilli flakes and oregano bearing the name of La Pino’z – with respect to its new franchisee as well.