MACT urges the central and state governments to investigate the ‘killer stretch’ in Delhi, where 247 road accidents occurred in 2021 – know more 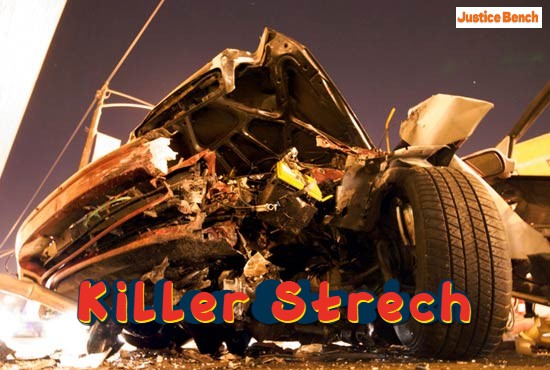 MACT urges the central and state governments to investigate the 'killer stretch' in Delhi, where 247 road accidents occurred in 2021.

The MACT judge Vinod Yadav while hearing case of [Aradhana & Ors. (LRs of Kamlesh Dubey) v. Untraced and Pushpa & Ors. (LRs of Omkar) v. Untraced called for a study of the areas where the majority of accidents occurred, as well as the installation of CCTV cameras and other safety measures.

The Central and Delhi governments have been asked by the Motor Accidents Claim Tribunal (MACT) in the national capital to develop measures to deal with motor vehicle accidents that occur on a particular stretch of the city, infamously known as the “killer stretch.”

MACT judge Vinod Yadav had previously sought data on accidents where the offending vehicles had remained untraced while dealing with two accident-related deaths.

Data from five police stations with jurisdiction over that stretch revealed that in 96 of the 247 accidents that occurred in 2021, the offending vehicles were untraced.

“This Tribunal has noticed that in most of the cases which go untraced, the accident takes place between 1am to 5am. It is also a common experience that there are a few foot-over bridges, as a consequence whereof the people tend to cross the road (highway) through iron grills, after damaging or removing the same and in some cases jumping over the same,”

The stretch in question was dubbed the “killer stretch” in the media and social circles, according to Judge Yadav.

The MACT studied a map of National Highway 1 (Grand Trunk Road) from the Singhu border to the Karnal by-pass (Mukarba Chowk) leading to Mukandpur, where a section of road had iron grills installed at a significant number of locations on the dividers. There were very few CCTV cameras along that stretch of road.

The MACT suggested that immediate remedial measures be taken;

Various agencies, including the National Highway Authority of India (NHAI), the Delhi government’s Public Works Department (PWD), the Delhi Police’s Traffic Police Department, and the DCP (Provisional & Logistics), were asked to convene a joint meeting and investigate the matter with “utmost seriousness” in order to save “valuable lives” and apprehend and bring “offending vehicles to justice with a fair amount of certainty.”