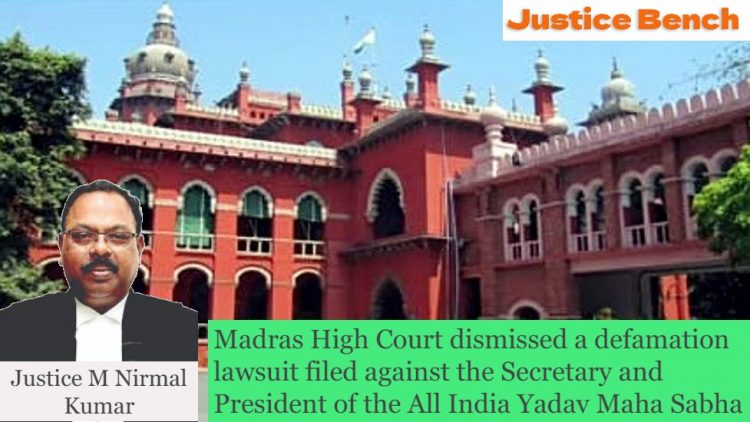 In the matter of L Nandagopal Yadav against Udai Pratap Singh & Anr, the Madras High Court bench comprising Justice M Nirmal Kumar denied a revision appeal filed against a Metropolitan Magistrate Court judgment dismissing a defamation charge made against the President and Secretary-General of the All India Yadav Maha Sabha.

The petitioner in this case is Nandgopal Yadav, who was removed from his position as Vice President of the aforementioned Sabha.

His suspension was announced, according to the petitioner, by placing an advertising in a Tamil daily that is read by his family, acquaintances, and the general public.

It was also claimed that the respondent’s actions brought him into disgrace, and he filed a complaint under Section 500 of the Indian Penal Code. He was also suspended, according to the petitioner, because he expressed concerns about financial mismanagement in the Sabha.

The petitioner further cited MN Neera vs AC Mathew & Anr, in which it was held that the burden of proof was on the accused to show that the statement was issued for the public benefit and that it fell within the exception.

The defendants, on the other hand, claimed that the petitioner received the removal order by registered mail. They went on to say that a public notice was made since Sabha members come from various backgrounds and it is vital to enlighten them about the Sabha’s operation and disciplinary actions.

The respondents further claimed that the notice does not accuse petitioners of anything and that they have just made a broad accusation.

The court agreed with the respondent’s views after hearing the arguments. The court further noted that the petitioner has made no claim that the imputation degraded his moral or intellectual character directly or indirectly.

The court also concluded that no components for the claimed offence were established, and dismissed the current petition.

The Counsel for Petitioner was Mrs C Celastina for Mr B Manivannan and the counsel for respondent was Mr R Ashwin Kumar, Legal Aid Counsel