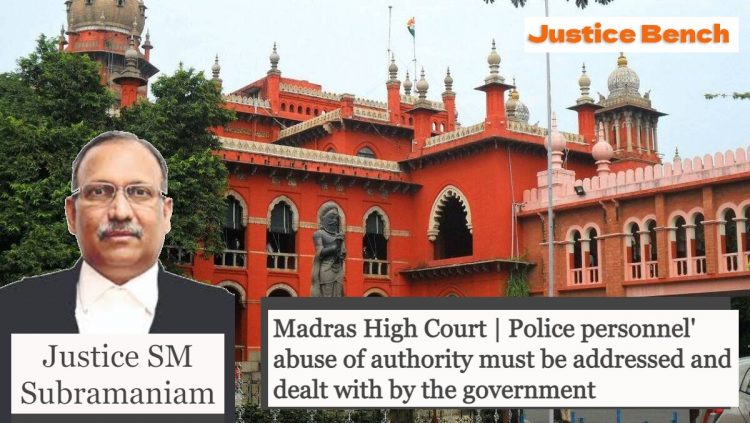 In the case of U Manickavel vs State of Tamil Nadu and ors, a Madras High Court bench led by Justice SM Subramaniam came down hard on police officials for abusing their authority, urging the State government to take action against the errant officers.

In the wake of multiple such complaints surfacing recently in the public domain, the court issued an interim ruling stating that such behaviour cannot be condoned since it violates regulations and statutes.

“Already there are several such allegations in the public domain regarding usage of black film in the official vehicles by the higher officials of the police department, misuse of department’s name in the private vehicles, abuse of police force in the name of orderly in their residences or otherwise and several such allegations are either unnoticed or no action has been taken by the Government. When such allegations are in the public domain and more so, visible, the Government is expected to initiate appropriate action to control such abuse of power by the higher police officials in order to maintain discipline in the force and to ensure public order in the Society,”

The petitioner, a police officer, had overstayed his government-allotted quarters, and the High Court was hearing his case from 2014. This year, the petitioner was evicted from his dwelling.

The petition requested that the Court grant a writ of certiorari requesting the records relating to Form-C, which was used to evict him from his quarters, under Rule 8 of the Tamil Nadu Public Premises (Eviction of Unauthorised Occupants) Rules.

At the outset, the single-judge stated that indiscipline among higher-ups in the police force would have terrible implications, including a loss of morale among officers.

“In recent days, there are several such allegations against the higher police officials, which cannot be tolerated at any circumstances as the same would lead to deterioration and result in unconstitutionality, more so, in violation of the statutes and rules in force,”

As a result, the State administration was ordered to address the general issue and inform the Court in a counter-affidavit of the actions taken in all such situations of police employees abusing their authority.

The respondent-authorities had not filed an action-taken report in relation to a notice issued to the petitioner in 2014 for overstaying his quarters, according to the order. Despite the fact that the official was ordered to leave the house assigned by a single-judge and Division Bench of the High Court in 2014.

Even though the official has now left the premises, the directive said that such illegalities will not be tolerated.

As a result, the Court instructed the State counsel to promptly communicate the terms of the ruling to the government, and the case was rescheduled for a hearing on June 21.