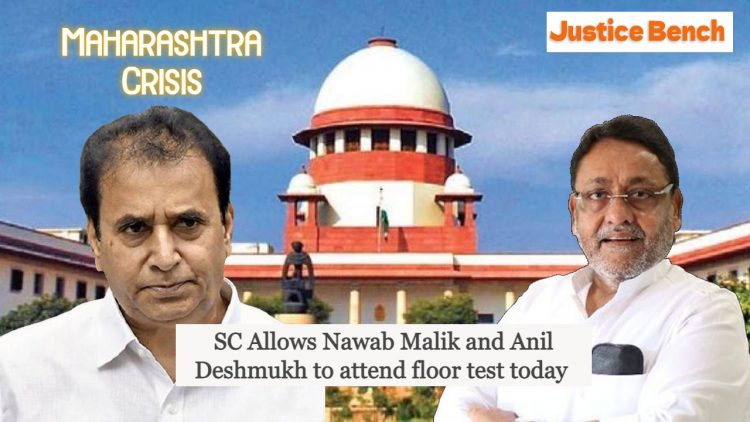 Nawab Malik and Anil Deshmukh, two imprisoned Maharashtra MLAs, were given permission to cast votes in the floor test that will be held today to determine the majority in the Maharashtra Legislative Assembly by the Supreme Court vacation bench of Justices Surya Kant and JB Pardiwala. The court questioned why the two MLAs couldn’t attend the special session given that there was no election and that they might not be prohibited under Section 62(5) of the Representation of People Act because of that.

Mehta initially opposed the plea, but after that he let the Court decide how to proceed. As a result, the Court granted permission for the applicants to travel to and from the prison while being escorted to the special session.

“We allow the applicants to participate in proceedings of floor test scheduled to be held tomorrow in the Maharashtra Legislatibe Assembly. Since the applicants are in custody pursuant to cases registered by Enforcement Directorate and Central Bureau of Investigation, the applicants will be accompanied by police to the Vidhan Sabha hall. Once proceedings are over, the applicants shall be brought back to judicial custody,”

For his suspected involvement in a money laundering case under the Prevention of Money Laundering Act (PMLA) involving underworld don Dawood Ibrahim, Malik is currently being held in judicial custody.

Deshmukh, who is also being held by the court, is the main suspect in a corruption case after the ED launched an investigation. This occurred after a Court-directed investigation prompted the Central Bureau of Investigation (CBI) to file a first information report (FIR) against him.

Malik and Deshmukh had requested a day’s temporary release from custody to participate in the Maharashtra Member of Legislative Council (MLC) elections, but the Supreme Court had turned them down last Monday.