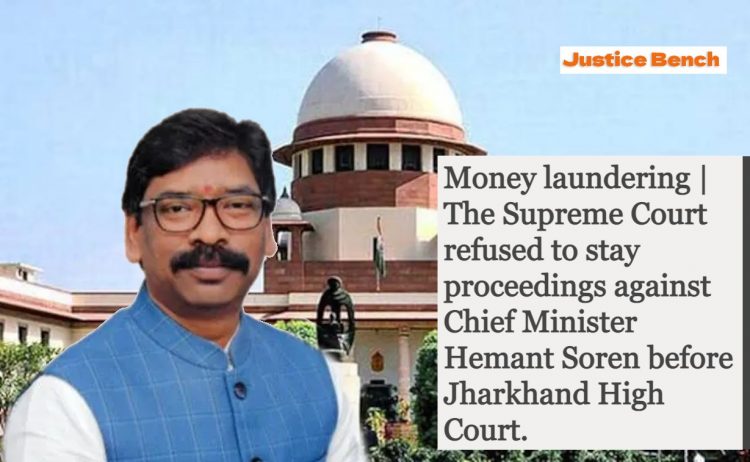 On Friday, a Supreme Court bench of Justices JK Maheshwari and Hima Kohli refused to stay the proceedings in the Jharkhand High Court against the State’s Chief Minister Hemant Soren, who is accused of money laundering, embezzlement, and irregularities in mining leases. The Court was considering an appeal of a Jharkhand High Court decision upholding the maintainability of Soren’s public interest lawsuit case.

The case was eventually adjourned and will be heard when the Supreme Court reopens after the summer vacation.

After a Bench led by the High Court’s Chief Justice relied on a sealed cover report from the Enforcement Directorate, the Jharkhand High Court ordered the CBI to investigate the matter (ED).

The State’s argument to the sealed cover report’s approval had been initially dismissed by the High Court. The Chief Justice-led Bench had ordered the State to disclose information of the 16 FIRs filed in connection with an alleged MGNREGA fraud, and noted that a Mining Secretary had been arrested and suspended in connection with the case.

The State subsequently appealed the proceedings to the Supreme Court, which on May 24 ordered the High Court to determine the maintainability of the PILs at the outset.

The High Court ruled on June 3 that the proceedings are maintainable, and the State appealed to the Supreme Court.

On Friday, Senior Counsel Mukul Rohatgi, representing the State, argued that the PIL before the High Court is politically motivated and has been filed solely to destabilise the State government.

It is only to destabilise the government. It is a politically motivated petition. Day to day hearing is happening. Don’t know what is the urgency,”

“I will inform what is the urgency. We cannot be street fighters,”.

When the Court reopened, the case was eventually assigned for hearing before another bench.

“On Mr Rohatgi’s request, List the matter upon reopening before an appropriate bench,”