Muslim girl aged 15 years is competent to marry a person of her choice; Punjab and Haryana High Court 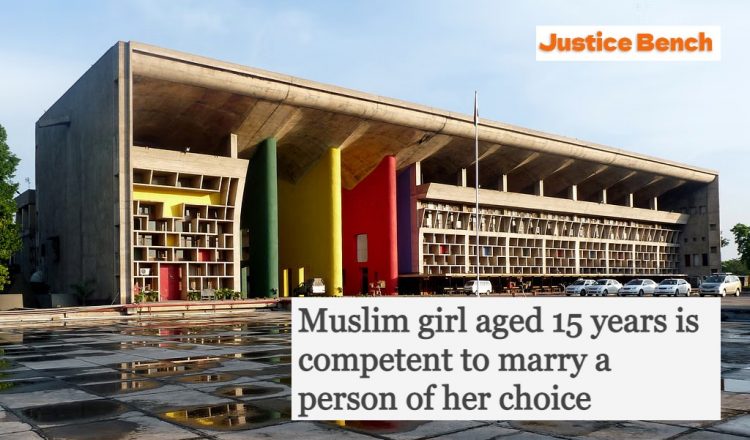 In the case of Gulam Deen v State of Punjab, a Muslim girl over the age of 15 is competent to enter into a marriage contract with the person of her choice, according to the Punjab and Haryana High Court bench of Justice Jasjit Singh Bedi. The Court reached this conclusion while hearing a petition for life and liberty protection filed by a Muslim couple who fell in love and wedded each other according to Muslim rites and ceremonies.

“The law, as laid down in various judgments cited above, is clear that the marriage of a Muslim girl is governed by the Muslim Personal Law. As per Article 195 from the book ‘Principles of Mohammedan Law by Sir Dinshah Fardunji Mulla’, the petitioner No.2 being over 16 years of age was competent to enter into a contract of marriage with a person of her choice”

The petitioners went to court claiming that the respondents were putting their lives and liberty in grave danger. The petitioner claimed that in Muslim law, puberty and majority are identical, and that a person is presumed to have reached majority at the age of 15. It was also argued that once a Muslim boy or girl reaches puberty, he or she is free to marry whoever they want, and guardians have no right to interfere. As a result, they requested that the police evaluate their request for protection.

In this regard, the Court cited the decision in Yunus Khan v State of Haryana, which said that a Muslim girl’s age of marriage is determined by Muslim personal law.

The Court also cited Article 195 of Sir Dinshah Fardunji Mulla’s book “Principles of Mohammedan Law,” which declares that “any Mahomedan of sound mind, who has reached puberty, may enter into a contract of marriage.”

In the lack of evidence, puberty is presumed at the age of fifteen years, according to the explanation to that Article. Because the girl was over 16 years old and the male was over 21, both petitioners were deemed to be of marriageable age in this case.

Furthermore, the Court stated that the petition’s issue was not the validity of the petitioner’s marriage, but rather the protection of their fundamental rights.

“The Court cannot shut its eyes to the fact that the apprehension of the petitioners needs to be addressed. Merely because the petitioners have got married against the wishes of their family members, they cannot possibly be deprived of the fundamental rights as envisaged in the Constitution of India”,

The petitioners’ representation was to be decided by the Senior Superintendent of Police in Pathankot, who was to take appropriate action.

The petitioners were represented by Advocate Sanjeev Kumar.