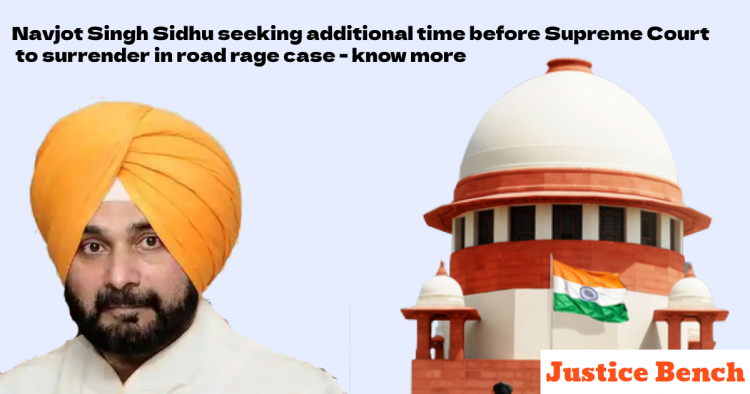 On Friday Morning the bench comprising Justice AM Khanwilkar heard matter after it was mentioned by Senior Counsel Dr. Abhishek Manu Singh, who asked Sidhu to file a formal application.

Congress leader and former Indian cricketer Navjot Singh Sidhu has approached the Supreme Court seeking additional time to surrender after he was sentenced to one year in jail by the top court in a 1988 road rage case.

On Friday Morning the bench comprising Justice AM Khanwilkar header matter after it was mentioned by Senior Counsel Dr. Abhishek Manu Singh, who asked Sidhu to file a formal application.

“He will surrender. But he wants a few weeks to settle up his medical health issues. Give some time please,”.

Accordingly, the Court asked Sidhu to file a formal application to that effect.

“Place a formal application and we will see. File this and mention it before the Chief Justice’s court, then we will see,”.

The bench comprising Justices AM Khanwilkar and Sanjay Kishan Kaul on Thursday allowed the review petition challenging the Supreme Court’s 2018 judgment in which the court had reduced the punishment imposed on Sidhu in the road rage case from 3 years imprisonment to ₹1,000 fine.

The son of the deceased victim has filed the review petition, where the victim allegedly died after a physical assault by Sidhu and others.

In December 1988 The victim and the appellants including Sidhu got into a heated exchange over a vehicle belonging to the appellants which were allegedly parked in the middle of the road, the prosecution contended.

According to the prosecution, This exchange led to a physical assault on the victim, who was pronounced dead when he was taken to the hospital. The prosecution claimed that Sidhu had fled the scene of the crime.

The trial court acquitted the appellants in 1999 on the grounds that the death of the victim was caused due to cardiac arrest and not due to the injuries sustained in the assault. This acquittal, however, was set aside by the Punjab and Haryana High Court in 2006, which found the appellants guilty of culpable homicide not amounting to murder.

The High Court awarded Sidhu and another accused three years’ imprisonment and a fine of ₹1 lakh each.

In 2007, the Supreme Court had stayed Sidhu’s conviction and granted him bail.

The Supreme Court in its May 2018 order let off Sidhu with a fine of Rs. 1000, for the offence of voluntarily causing hurt under Section 323 of IPC.

This led to the review petition which was allowed yesterday.