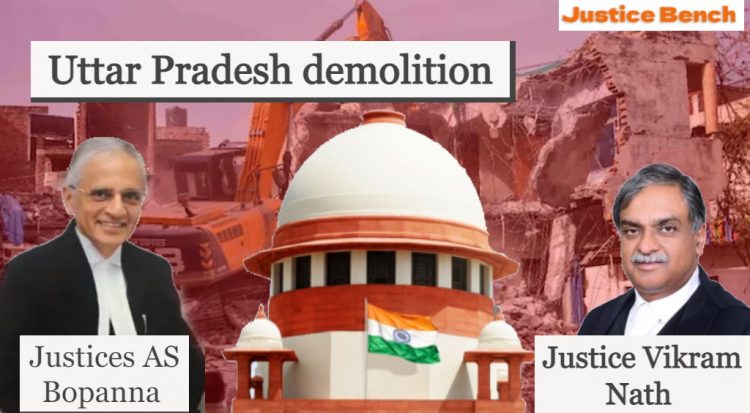 On Thursday the Supreme Court Bench of Justices AS Bopanna and Vikram Nath in the case of Jamiat Ulama-i-Hind and anr v. Union of India and ors sought the response of the Uttar Pradesh government in a plea filed by Jamiat Ulama-i-Hind challenging the recent demolition drive carried out on houses of those who had allegedly participated in protests against BJP spokesperson Nupur Sharma, after she had made remarks against Prophet Muhammad.

The court did not pass any interim order, but urged the authorities to ensure nothing untoward happens until it hears the matter on Tuesday, June 21.

The Court made it clear that it cannot stop the demolitions, but can only state that they must be carried out in accordance with the law.

“We can’t stay demolitions but (can only) say go in accordance in law,”.

By the next date of hearing, the State and the affected local authorities are scheduled to submit their positions on affidavit.

The petition, filed through Advocate Kabir Dixit in an already-pending case before the Supreme Court, claimed that the demolitions in the State were carried out in response to protests against BJP spokesperson Nupur Sharma, who was suspended following remarks she made during a television debate about Prophet Muhammad and Islam that sparked an international outcry.

The petitioner requested that the State issue orders ensuring that no additional demolition exercises of any kind take place in the state “without following due process and that any demolition must be done only after proper notice and opportunity for hearing is given to each of the affected persons.”

The petition also claims that Section 27 of the Uttar Pradesh Urban Planning and Development Act, 1973, mandates that the impacted individual be heard before the demolition is carried out and that the affected person be given at least 15 days’ notice. It was pointed out that under the 1973 Act, a person who is aggrieved by a demolition order has 30 days to file an appeal with the chairman under the Act.

The demolitions were carried out without following due process, according to Senior Counsel CU Singh, who represents the applicant.

According to Singh, the homes that were demolished as part of the effort had been existing for more than 20 years, and some of them did not even belong to the accused, but to their elderly parents.

Singh also mentioned that Section 27 of the Uttar Pradesh Municipality Act mandates that owners of such buildings be notified.

“At least 15 days have to be given for this, only if no action for 40 days can properties be demolished,”

The State of Uttar Pradesh’s Solicitor General, Tushar Mehta, argued that the application was not brought by impacted individuals.

“We filed affidavit after earlier order in Jahangirpuri, none of the affected parties filed plea. Even here it’s some Jamiat. We made clear no legal structure was demolished,” Mehta said.

Mehta further claimed that all demolitions were carried out in compliance with the law.

Senior Counsel Harish Salve, who is also representing UP, stated that the demolitions were carried out in accordance with the law.