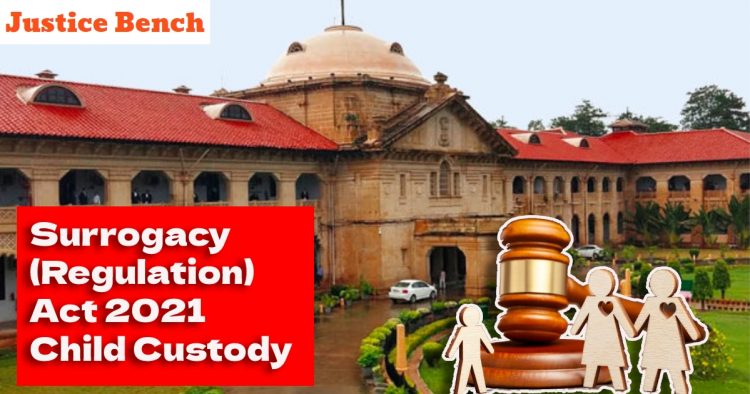 In the Allahabad High Court in the case of Snigdha Majumdar v. Union of India the Surrogate parents argued that a specific provision in the 2021 Act left them unable to secure a visa for their child.

The Allahabad High Court requested a response from the Central government on the issue of custody of a child born through surrogacy, prior to the implementation of the Surrogacy (Regulations) Act, 2021.

Justices Attau Rahman Masoodi and Vikram D Chauhan of the Supreme Court of India sought the government’s response to a petition brought by a surrogate couple who alleged that a provision in the 2021 Act rendered them helpless in acquiring a visa for their child.

A couple who became parents through surrogacy before the 2021 Act took effect requested the High Court’s intervention.

When they applied for an Australian visa for the child, the High Commission told them that they needed to submit a court ruling about the child’s custody, stating that they have complete consent over where the child can reside. The couple was given 180 days to get this court order, after which their visa application would be rejected if they did not.

However, under Section 4(iii)(a)(II) of the 2021 Act, a Magistrate First Class has jurisdiction to decide the child’s custody only before any progress toward surrogacy has been made. Once the surrogacy was approved and the child was born, the magistrate was effectively powerless to issue such an order. According to the plea,

“That it seems that the Australian High Commission is also demanding a similar order to the one contemplated under the 2021 Act, but which cannot be issued by the Magistrate in the Petitioners’ case because the stage of passing of such order has elapsed in this case, and the Magistrate has no power to pass an order at this stage.”

As a result, the petitioners sought the following reliefs:

(a) Issue order or direction commanding Central government to immediately address the issue of applicability of the Surrogacy (Regulations) Act 2021 to children born of surrogacy before implementation of the said Act;

(b) Issue order or direction commanding Central government to devise an alternate mechanism to certify/clarify the rights and custody of children born out of surrogacy before the implementation of the Act;

(c) Issue order or direction to the effect that the couple have complete rights over their son and have full consent over where the child can reside.

After reviewing the Act’s provisions, the Bench stated in its order,

“Before consideration of the aforesaid provisions enabling the minor child to have an order concerning his parentage and custody, we deem it proper that notice through registered post as well as Dasti may be issued to opposite party nos.2 and 3. Opposite party no.1 is already represented by Sri Manoj Kumar Singh, learned counsel for Union of India.”

On July 5, the case will be heard.