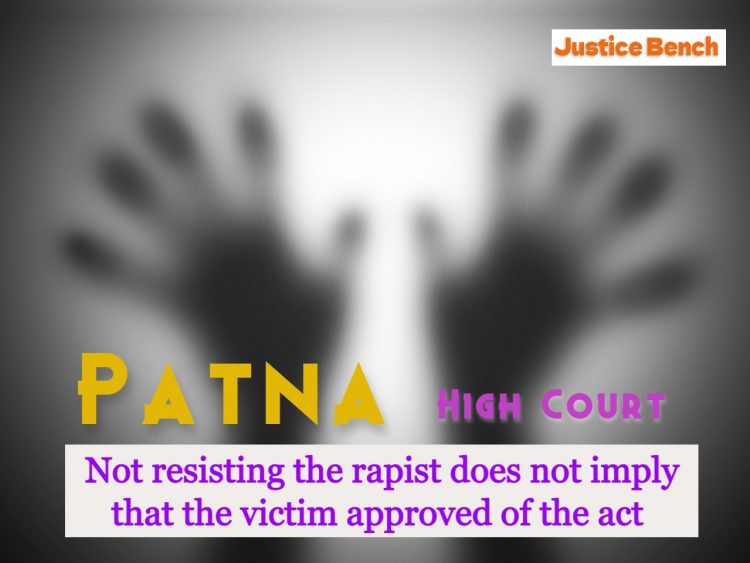 In a significant decision, the Patna High Court bench of single-judge Justice AM Badar last week found that a rape survivor’s lack of physical resistance does not imply that she agreed to the act in the case of Islam Mian @Md Islam vs. State of Bihar and dismissed the defense’s claim that the sex was consensual because the survivor had no bodily injuries suggesting resistance.

“The prosecutrix is a married woman having a son aged about 4 years. She was pitted against an adult male in the night hours at her own house. In such situation, it might not be possible for her to offer resistance to the act of the accused. Moreover, mere non offering of resistance cannot amount to consent,”

Justice Badar stated in his ruling dated June 22 that Section 375 of the Indian Penal Code (IPC) (which deals with rape) makes it clear that consent must take the form of an unambiguous voluntary agreement demonstrating willingness to engage in the sexual act.

The Indian Penal Code’s Sections 376 (rape), 452 (house trespass), 323 (voluntarily causing harm), and 506 (criminal intimidation) were cited as grounds for the appellant’s conviction in a criminal appeal that was brought before the court on March 9, 2017.

Additionally, he was found guilty in accordance with the Scheduled Caste and Scheduled Tribe (Prevention of Atrocities Actpertinent )’s provisions.

The applicant had received a sentence of 10 years in rigorous confinement from the sessions court.

The survivor had worked as a labourer in the appellant’s brick klin. She requested her pay from the appellant on April 9, 2015, after completing her work, but he refused, saying it would be delivered later. Later The appellant broke into the survivor’s home that evening while she was cooking in a village in the Jamui district, dragged her into a room, and raped her.

But after hearing her cries, the villagers caught the criminal and chained him to a tree. A First Information Report (FIR) was subsequently filed. The court then stated that the victim’s statement was credible and was supported by other witnesses while carefully reviewing the evidence in the case.

Therefore, the Court upheld the appellant’s conviction for rape and home invasion. The court still acquitted him of those charges because it found that the evidence was insufficient to prove a case under Sections 323 (voluntarily inflicting harm) and 506 (criminal intimidation) of the IPC and offences under the SC/ST Act.

While the State was represented by Additional Public Prosecutor Bipin Kumar, Advocate Diwakar Upadhyaya appeared on behalf of the appellant.