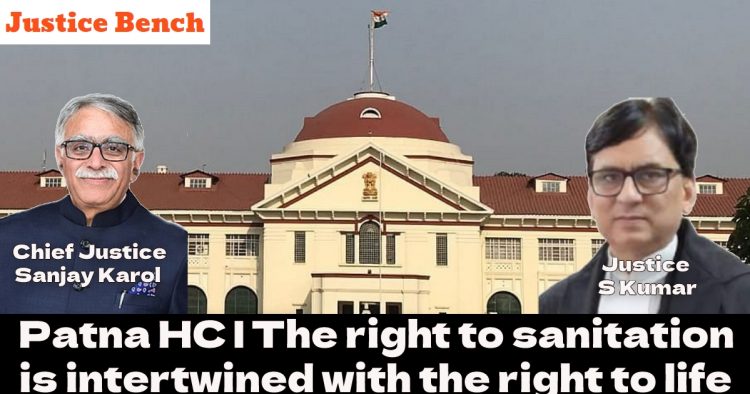 The Patna High Court in the case of The National Highway Projects in the State of Bihar v. State of Bihar noted that Men, unlike women, stand unashamedly on highways to relieve themselves, but society cannot expect the same from the latter.

The bench comprising Chief Justice Sanjay Karol and Justice S Kumar, found that it was the State’s responsibility to provide adequate sanitation and personal care services on highways. The importance of providing proper sanitation facilities for women on highways was also mentioned.

“Unlike women, men shamelessly stand on the Highways to ease off themselves, but a society cannot expect the same from the former and therefore it is an urgent duty upon the State/its instrumentalities to ensure that such needs, which are the very definition of basic needs, are met,”

The Bench Stated in it’s Order

The Court lamented the absence of highway amenities in the homeland of Dr. Bindeshwar Pathak, who revolutionised India’s sanitation system by installing Sulabh Sauchayalas across the country.

The right to sanitation was virtually recognised as a fundamental right by courts after a careful review of the legislative, constitutional, and international responsibilities that the Central and State governments were required to follow.

The Court stated that the State’s role was much more pressing in the case of women.

“How would a lactating mother travelling from Kishanganj (farthest District from the capital city of Bihar) to Patna (capital city) feed an infant or ease off herself without any such facilities available on the Highways?”

the Court Probed in to issue

In addition, the Court evaluated the matter of putting more petrol pumps on roads in order to reduce petrol and diesel blackmarketing. It was discovered that installing petrol pumps at regular intervals has both economic and social benefits.

“The equitable distribution of essential commodities, such as petroleum, is a positive obligation on the State, and must continually take steps to ensure that this obligation is met. In this regard, periodical survey for updating is absolutely necessary. Numerous benefits accrue when the same is fulfilled…easy access to petrol will go a long way in curbing blackmarketing practices an evil of society.”

As a result, the Court stated that in order to further the cause of holistic development, authorities must take steps to build units that are permitted.