PC George’s bail has been revoked by a Thiruvananthapuram court after he made a communal comment in breach of his bail conditions. 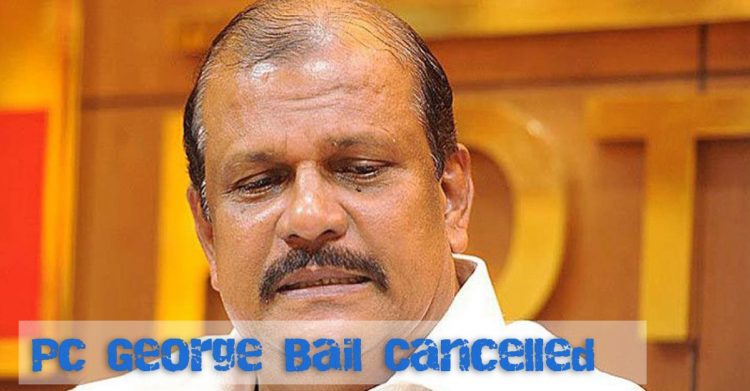 PC George's bail has been revoked by a Thiruvananthapuram court after he made a communal comment in breach of his bail conditions.

The case State of Kerala v PC George, bail was revoked after the defendant failed to comply with a requirement of the bail order that stated, “the accused is directed to not make or propagate any controversial statements which may hurt religious sentiments of others“

The bail granted to former MLA PC George in the case filed against him for uttering communal statements was revoked on Wednesday by a Magistrate Court in Kerala.

The bail granted to George on May 1 was revoked today by the Judicial First Class Magistrate, who noted that the former lawmaker had made another communally charged remark in violation of the Court’s bail restrictions.

The speech made by the accused can be considered as a violation of the fourth bail condition, as it is of such a nature to promote disharmony, hatred and ill-will between persons belonging to the Muslim community and the followers of the two other prominent religions of our state. The contention of the defense counsel that the subsequent FIR is registered in violation of the freedom of speech and expression of the accused is not sustainable here. The accused was released on bail in this case subject to the conditions that he shall not make or propagate any controversial statements which may hurt the religious sentiments of others. But within 10 days after his release, he has made this speech with the deliberate and malicious intention of outraging religious feelings of a class of citizens, which is a clear violation of the fourth bail condition. The accused has misused the concession granted to him by not following the terms agreed to while he is released on bail,

George was detained on May 1 for a speech he gave on April 29 at the Ananthapuri Hindu Maha Sammelan. Several complaints had purportedly been filed with the State Police about certain inflammatory words made against the Muslim community.

He was charged under the Indian Penal Code’s Sections 153A (promoting enmity between different groups on religious, racial, or other grounds and doing acts prejudicial to maintaining harmony) and 295A (deliberate and malicious act intended to offend religious feelings by insulting its religion or religious beliefs).

The Judicial First Class Magistrate in Thiruvananthapuram granted him bail the same day he was detained.

On May 10, the Palarivattom Police in Kochi filed a suo motu complaint against George under Sections 153A and 295A of the Indian Penal Code for making a communally charged speech at a temple in Vennala on May 8.

George then went to Ernakulam’s Principle Sessions Court to get anticipatory bail in that matter.

On Monday, May 23, he sought the Kerala High Court, which granted him temporary release.

The High Court further stated that the grant of interim bail would not impact the prosecution’s right to seek cancellation of the Magistrate’s bail granted to George in the first case.

The Thiruvananthapuram Magistrate Court observed today, after reading a copy of the speech and seeing a video of it, that

It is seen that there are highly provocative remarks contained in it which are capable of promoting disharmony hatred and ill will between different religious groups on the ground of religion. There are also other indications in the above speech that all criminals who indulge in the offenses related to land mafia terrorism, Havala business, narcotic transactions and smuggling of gold belonged to the Muslim community. It is further stated that girls belonging to the Hindu and Christian communities are being corrupted by love jihad by Muslims. The accused is also seen to have stated that the exponential hike in Muslim population has to be countered by the women of the community of Hindus and Christians, by giving birth to at least four children. Another remark made by the accused in the above speech is that it is not possible for a Hindu to conduct a shop in an area surrounded by the Muslim community. Whereas a Muslim could very well conduct a shop in an area surrounded by the Hindu community. There are also various other comments in the above speech, depicting, the members of the Muslim community in a bad light.“

As a result, George’s bail was revoked in the first case.