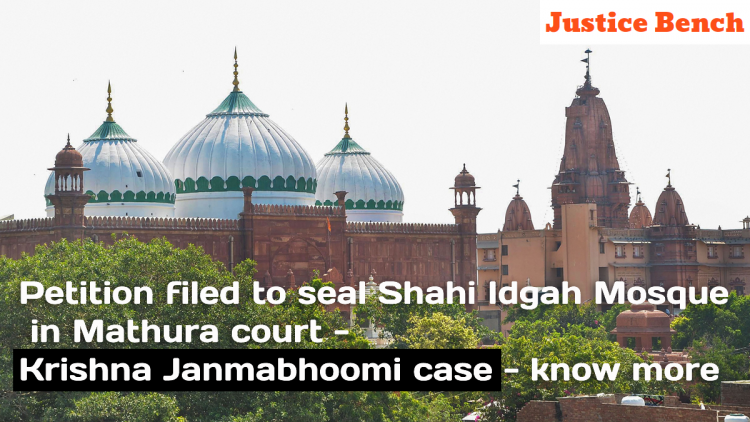 It is submitted that in the recent survey conducted in the case of Rakhi Singh vs Government of Uttar Pradesh, the manner in which Hindu Shivling remains have been found in Gyanvapi Masjid

Similar to the  Varanasi court order to seal area inside the Gyanvapi mosque from where Shivling is stated to have been recovered. In line with the Gyan Vapi plea, a similar plea has been filed before a Mathura court in Mathura seeking to seal the Shahi Idgah mosque which is the subject matter of the Sri Krishna Janmabhoomi dispute.

Mahendra Pratap Singh and Rajendra Maheshwari who are advocates moved the plea and have cited the order passed in Gyanvapi dispute to claim similar relief with respect to Shahi Idgah mosque.

“It is submitted that in the recent survey conducted in the case of Rakhi Singh vs Government of Uttar Pradesh, the manner in which Hindu Shivling remains have been found in Gyanvapi Masjid, it has become clear that the respondents have been protesting there since the beginning. The same situation is of the litigant property of the above case of Shri Krishna Janmabhoomi which is the real sanctum,” the plea said.

In the plea filed before Senior Division Civil Judge, Mathura claimed that there are Hindu religious relics like lotus, Sheshnag, Om, Swastika etc. some of which have been destroyed and some are now trying to be destroyed by the respondents.

the application stated that

“In this situation, if the Hindu relics are destroyed, the object of the suit and the evidence will be lost, causing irreparable loss to the plaintiffs,”.

Therefore, the petition has sought arrangements for proper security of the premises by restricting everyone’s access to the mosque. the plea further prayed that,

“It is requested that in view of the above circumstances, the Senior Superintendent of Police, Mathura and District Magistrate Mathura and CRPF Commandant should be directed to seal the property in question i.e. Shahi Idgah and appoint security officers for the premises and direct them not to destroy the ancient Hindu religious symbols Swastika, Kamal, Om,”.

A civil court had earlier dismissed a suit that sought removal of the Shahi Idgah Masjid on grounds that it was built over Krishna Janmabhoomi land. The court had cited the bar on admitting the case under the Places of Worship (Special Provisions) Act, 1991.

Subsequently, the lower court decision was however appealed before the Mathura District Court which reserved its verdict on May 5, 2022. The verdict is expected to be pronounced on May 19, Thursday.