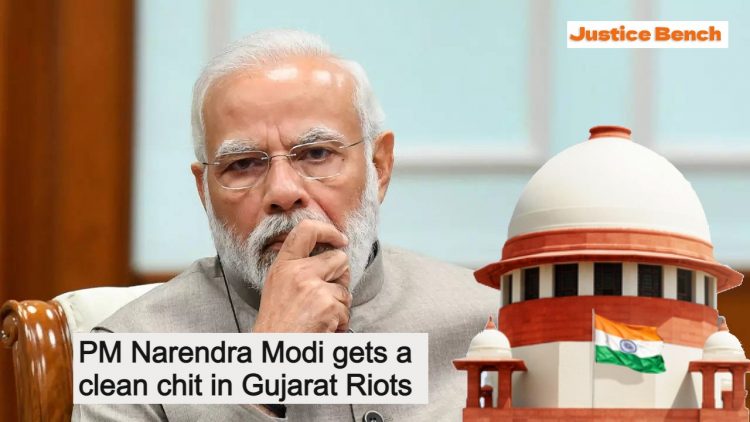 PM Narendra Modi gets a clean chit in Gujarat Riots

The Supreme Court Bench of Justices AM Khanwilkar, Dinesh Maheshwari and CT Ravikumar dismissed the appeal made by Zakia Jafri, the wife of former Congress member of parliament Ehsan Jafri, on Friday in the case of Zakia Ahsan Jafri vs. State of Gujarat, noting that there was no evidence to support a larger criminal conspiracy on the part of Prime Minister Narendra Modi. The appeal was made in relation to the clean bill given to Modi by the Special Investigation Team (SIT) in relation to the 2002 Gujarat riot

“The materials collected during the investigation do not give rise to strong or grave suspicion regarding hatching of larger criminal conspiracy at the highest level for causing mass violence across the State against the minority community and more so, indicating involvement of the named offenders and their meeting of minds at some level in that regard,”

We are of the considered opinion that no fault can be found with the approach of the SIT in submitting final report dated 8.2.2012, which is backed by firm logic, expositing analytical mind and dealing with all aspects objectively for discarding the allegations regarding larger criminal conspiracy (at the highest level) for causing and precipitating mass violence across the State against the minority community during the relevant period. As aforementioned, the SIT has gone by the logic of falsity of the information or material and including the same remaining uncorroborated.”

On December 8, 2021, the Court had reserved judgement. The SIT members “came out with flying colours unscathed,” according to the Bench, who praised them for their “indefatigable work.” .The epithet “disgruntled” was also used to describe a number of Gujarati officials, notably former state DGP RB Sreekumar.

“At the end of the day, it appears to us that a coalesced effort of the disgruntled officials of the State of Gujarat along with others was to create sensation by making revelations which were false to their own knowledge. The falsity of their claims had been fully exposed by the SIT after a thorough investigation,”

The Court emphasised that such officials needed to face charges for intentionally “keeping the pot boiling.”

“Intriguingly, the present proceedings have been 305 pursued for last 16 years including with the audacity to question the integrity of every functionary involved in the process of exposing the devious stratagem adopted (to borrow the submission of learned counsel for the SIT), to keep the pot boiling, obviously, for ulterior design. As a matter of fact, all those involved in such abuse of process, need to be in the dock and proceeded with in accordance with law,”

During the Gujarat riots, Ehshan Jafri killed in the infamous Gulbarg Society Massacre.

Following the riots in Gujarat, Zakia Jafri complained to the state’s then-director general of police in 2006 and asked for the filing of a First Information Report (FIR) under several sections of the Indian Penal Code (IPC), including Section 302. The Gujarat Chief Minister at the time, Modi, was named in the complaint along with other politicians and officials.

The apex court established a SIT in 2008 to produce a report on a number of riot-related trials, and later ordered the SIT to look into the complaint made by Jafri. The SIT report cleared Modi, and in 2011, the Supreme Court ordered the SIT to present its closure report to the relevant Magistrate. The petitioner was then given the opportunity to address any objections she might have to the findings. After receiving a copy of the closure report in 2013, the petitioner filed a petition objecting to it.

The Magistrate rejected Jafri’s petition and upheld the SIT’s closure report. Outraged, the petitioner went to the Gujarat High Court, which, in 2017, upheld the Magistrate’s judgement and dismissed the Jafri petition. Jafri and activist Teesta Setalvad then moved the Supreme Court to overturn the decision to accept the SIT’s clean bill of CHIT. Senior Advocate Kapil Sibal, the petitioner’s advocate, asserted at the hearing that the SIT’s probe was biassed and that it did not thoroughly review all of the material at hand. He claimed that the State encouraged the spread of hatred.

Sibal added that the SIT should be investigated into for drawing conclusions that were false. The SIT conducted a “collaborative exercise” rather than a “investigation,” and their investigation was riddled with omissions meant to shield the conspirators. Sibal claimed that there was evidence of a plot in the form of technological documents, including call data records of senior police officers and mobs that identified Muslim homes. He claimed that the Magistrate and High Court also decided to ignore the same, while the SIT completely disregarded everything and made no further inquiries into the matter. Sibal’s allegations that dead bodies were carried around were denied by senior counsel Mukul Rohatgi.

According to the State’s Solicitor General Tushar Mehta, the State “done everything it could.” He had questioned Teesta Setalvad and Citizens for Justice’s trustworthiness, stating that they had embezzled funds intended for the riot victims’ welfare. He claimed that Setalvad was the driving force behind Zakia Jafri, exploiting her predicament to demand action.