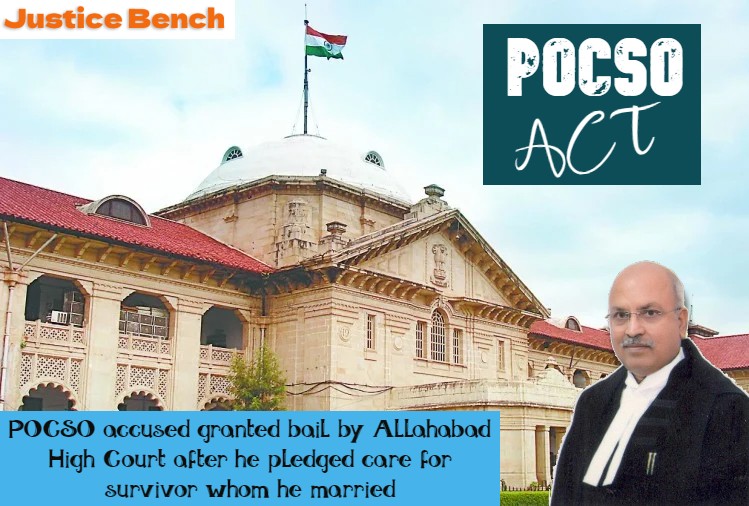 The Allahabad High Court bench comprising Justice Krishan Pahal in the case of Ramshankar v State of UP held that although the alleged offender and victim’s marriage may not be legal, the court must take a realistic approach.

The High Court on Thursday granted bail to a man accused of sexually assaulting a child under the Protection of Children from Sexual Offences (POCSO) Act after he promised to look after the survivor, whom he had married, and their kid born due to alleged assault.

While granting bail, Justice Krishan Pahal stated that, while the accused and survivor’s marriage may not be legal, the court must adopt a realistic approach.

“The matter shatters the conscious of one and all. What is the fault of the new born baby who has come to world under such circumstances? A lot of water has flown down the Ganges. Now, it’s time to move ahead,”

The Court said in it’s order

According to the prosecution, the applicant persuaded the underage girl away and then abandoned her outside the community after around six months. She was discovered to be pregnant at the time, and she gave birth to a baby girl not long after.

The applicant said that he and the survivor were in love and eloped because they were afraid of the townspeople. They had married at a temple, but their union had not been recorded. It was also claimed that the victim’s statement against him was false and that she was forced to make it. He offered to raise his child and stated that he was prepared to keep his married wife and newborn child with him.

After reviewing the evidence, the Court determined that the girl was between the ages of 18 and 20 years old, based on the radiological assessment. As a result, she may have been a major at the time of the crime.

Because the life of a newborn infant was at jeopardy, the single judge was inclined to make an exception under the unusual circumstances of the case.

“The youth in their tender age become victim to the legal parameters though rightly framed by the legislature, but here this Court is being drawn to make an exception in the extraordinary circumstances of the case,“

The court emphasised that in such a scenario, a hyper technical and mechanical approach would be ineffective.

“The mathematical permutations and combinations have to be done away with.. Human psychosis and that too of the adolescents has to be taken into account.”

The judge examined the case of Atul Mishra v State of Uttar Pradesh, in which the POCSO Act’s strict restrictions were waived due to special circumstances.

The Court decided to grant the bail motion based on these considerations. It did say, however, that the accused was being freed on bond on the condition that he would look after his wife and kid.

The judge further ordered him to deposit an amount of Rs. 2 lakh in a fixed account in the name of the kid within six months of his release.

“In case of breach of any of the above conditions, it shall be a ground for cancellation of bail“,