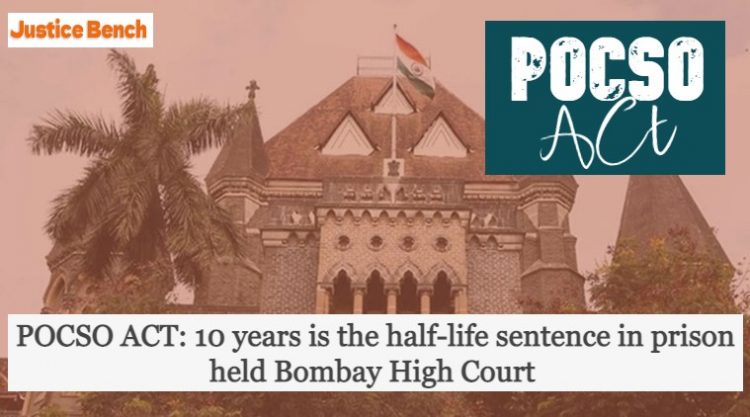 In a recent ruling, the Bombay High Court’s judge  Justice Sarang V. Kotwal in the case of Suresh Kashinath Kamble vs The State of Maharashtra stated that under the Protection of Children from Sexual Offenses (POCSO) Act, a sentence of half a life sentence would be equivalent to ten years in jail.

The court ruled that because the word “life imprisonment” is not defined under the POCSO Act, the Indian Penal Code’s definition must be used to determine its meaning (IPC).

The Court found that while life imprisonment is regarded as equal to twenty years of imprisonment under Section 57 of the IPC when dividing up penalty terms, half of it would equal ten years.

The matter is fully covered by Sections 2(2) of the POCSO Act and Section 57 of the IPC, according to amicus curiae advocate Drupad Patil, and the court has already addressed it in the case of Chandrakant Vithal Pawar v. State of Maharashtra.

The POCSO Act’s Section 2(2) stipulates that the definitions of terms under the IPC, the Code of Criminal Procedure, the Juvenile Justice (Care and Protection of Children Act), and the Information Technology Act shall be used to determine the meaning of terms not defined by the Act.

According to Section 57 of the IPC, a sentence of life imprisonment counts as the same as a sentence of twenty years in prison when determining the fractional terms of a sentence. Patil said that because of these clauses’ clarity and the judgment’s clarity, the superintendent had no need to ask the Court for advice in this matter.

The Court concurred and ruled that when the accused is given a sentence of half-life in prison, Section 57 IPC makes it clear how the punishment should be calculated.

As a result, the Court decided that ten years in jail would be the equivalent of half a life sentence in this case.