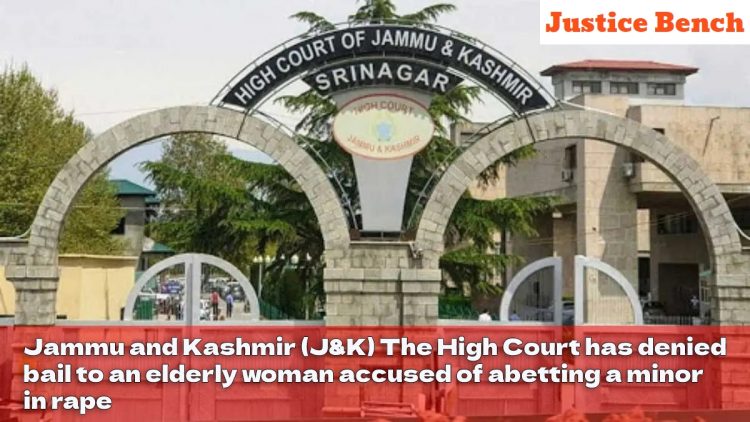 The Jammu and Kashmir High Court in Zubeeda vs Union Territory of J & K case the accused cannot be awarded relief just because she is an elderly woman, according to single-judge Justice Sanjay Dhar.

The Jammu and Kashmir and Ladakh High Court last week declined to give bail to a 63-year-old woman accused of helping her 65-year-old husband commit rape on a young girl, stating that she is not entitled to any relief simply because she is an old lady.

The accused is not entitled to relief just because she is an elderly woman, according to The Bench comprising single-judge Justice Sanjay Dhar.

The 14-year-old girl was under the custody of the accused couple, according to the court, because her parents had sent her there to study embroidery from Zubeeda’s husband.

“The material on record shows that the victim was sent by her father to the house of the petitioner to learn embroidery work. Thus, the victim was under guardianship of the petitioner and her husband. A bond of trust and confidence must have been reposed by the victim but the accused by indulging in abhorrent behavior with her, have shaken her trust and confidence and brought a bad name to the relationship of a child with her guardian who were as good as her parents,”

The judge further stated that this is not a usual situation in which the accused is a minor.

“It is not an ordinary offence where the perpetrator of the crime is a young boy but it is a case where the perpetrators of the crime happen to be the persons aged more than four times that of the age of the victim. The gap in the age of the accused and the victim makes their alleged act more heinous and it shows an element of perversion in the offence alleged. The position of the petitioner qua the victim makes the offence all the more heinous. Thus, merely because the petitioner happens to be a woman does not entitle her to concession of bail in these circumstances,”

The victim’s parents allegedly sent her to the accused couple’s house to learn stitching, according to the FIR. The accused raped the victim twice while she was staying with them for a week.

Even before the trial court, the victim testified that petitioner Zubeeda had sprayed some liquid on her face, knocking her out and leaving her naked on the floor. Zubeeda also allegedly forced her to sleep with her spouse.

According to the FIR, the issue arose after the victim returned to her parents and the accused called her, promising to take care of any abortion charges if she became pregnant. He had also offered to compensate the victim’s father Rs 4,000 to Rs 5,000 for failing to report the crime to the police.

The bench stated in its May 21 orders that Zubeeda is implicated in the commission of an offence under Section 376/109 of the Indian Penal Code, as well as Sections 4 and 17 of the POCSO Act.

“Abetment of an offence carries the same punishment as is provided for that offence. Section 376(3) IPC provides punishment in a case where rape has been committed upon a woman under 16 years of age. As per this provision, the punishment provided for such offence is not less than 20 years, which may extend to imprisonment for life. Thus, the offences for which the petitioner is facing trial are serious in nature,”

The judge also highlighted that the case’s trial has just recently begun, and that only the victim’s statement has been recorded thus far, while the majority of prosecution witnesses, including her parents, have still to be questioned.

the Judge Held in the Order

“This can only be achieved if the victim’s and material witnesses’ statements are recorded while the accused is detained,” the single-judge stated.

As a result, the judge denied the bail motion.

The Union Territory of Jammu and Kashmir was represented by Government Advocate Sajad Ashraf.