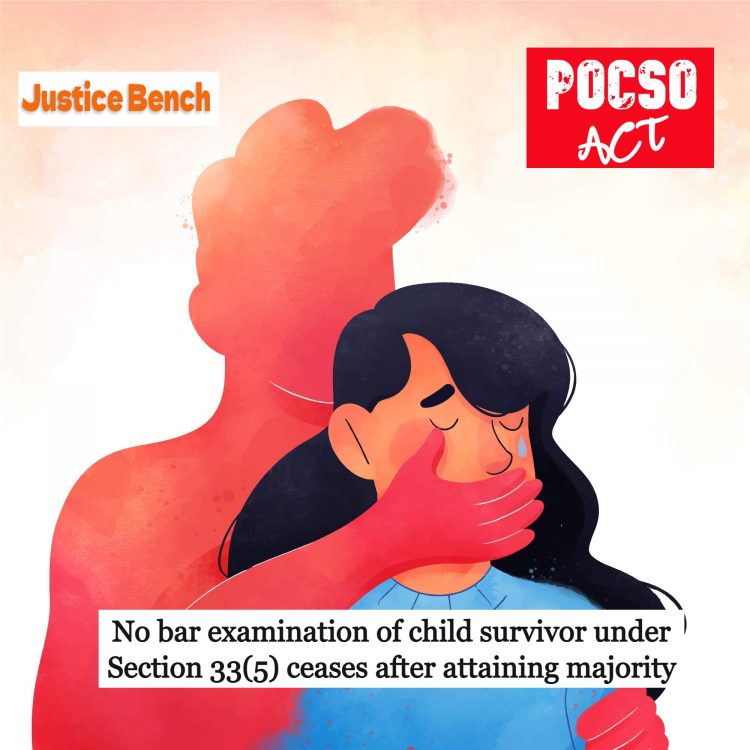 In the case of Mahammad Ali Akbar vs State of Karnataka, the Karnataka High Court bench of single-judge Justice M Nagaprasanna recently held that the rigors of Section 33(5) of the Protection Of Children from Sexual Offences Act (POCSO Act), which prohibits repeated examination of a child survivor, are diluted when the child reaches majority, and there is no bar to calling her to testify before the court.

In this case, the judge noted that the girl was 15 years old when the first information report (FIR) was filed, and she is now 18 years old.

“A reading of Section 33(5) of the Act would clearly indicate the intention behind such enactment that in genuine cases the child-victim is not harassed. That would not mean that the accused can be deprived of his right to cross-examination in a trial, particularly, where offence punishable is beyond ten years. The mandatory nature to recall the witness for cross-examination, if the evidence appears to be essential, is always necessary for a just decision in a case, save in cases where repeated applications under Section 311 of the CrPC are filed on frivolous reasons,”

The bench went on to say that because there is a presumption against the accused in a POCSO case under Section 29 of the Act, it is even more crucial for the accused to present evidence to counter that presumption.

The special court dismissed the plea based on section 33(5) of the POCSO legislation, which was seized of a plea contesting orders of a special POCSO court denying appellant’s plea seeking the recall of the victim in the case so that he may cross-examine her further. It also took note of the appellant’s contention that the survivor’s father testified before the court that appellant was a relative who had never subjected his daughter to any sexual conduct and that they both loved each other.

“The petitioner, who is now facing trial for offences punishable under the POCSO Act, if convicted, would end up with conviction of more than 10 years. In such a case, the accused should be given an opportunity to defend himself, except in cases where an application is filed by adopting dilatory tactics. The reason rendered in the application filed is clear that it is filed only after the admission of the victim’s father that there was no sexual act committed by him. Therefore, the order rejecting the application despite the soul and spirit of Section 311 Cr.P.C is thus rendered unsustainable,”

As a result, the Court determined that recalling the survivor to testify is necessary to ensure that the trial does not result in any miscarriage of justice.