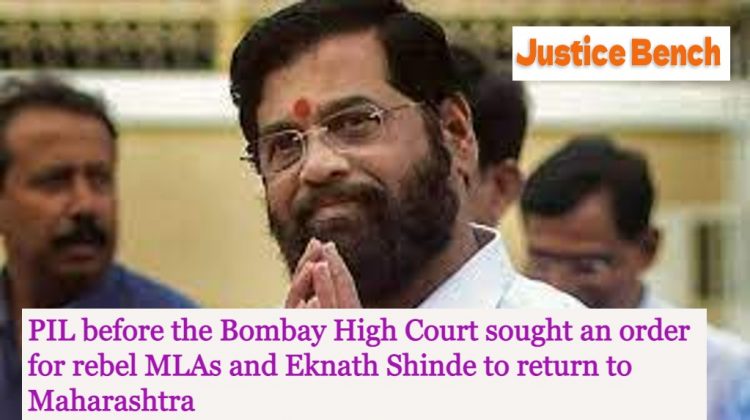 In the matter of Utpal Chandawar vs. Eknath Shinde, a public interest litigation (PIL) petition has been submitted to the Bombay High Court asking that the Shiv Sena rebel MLAs and ministers, who are presently camping in Guwahati, be ordered to immediately return to the State.

In the PIL, which was brought by attorneys Asim Sarode and Ajinkya Udane, it is also demanded that the renegade MLAs be punished appropriately for their disregard for the law and for good governance.

A bench of Chief Justice Dipankar Datta and Justice Makarand Karnik heard the petition today and agreed to consider it soon.

The PIL stressed that it is solely concerned with the ongoing political instability in the State, which breeds a sense of unease among citizens, and that it has nothing to do with any political leader or party rising up in protest.

The appeal asserted that the continued “political nuisance” cannot be justified because it also affects the public, citing section 268 of the Indian Penal Code, which criminalises public nuisance.

Therefore, the Court should rule on this “matter of law” in light of the rebellious Sena MLAs’ history and its consequences. The petition pertinently questioned how the renegade MLAs were paying for their expensive hotel stays and use of private jets for trips.

Additionally, the petition claimed that the majority of the dissident MLAs occupy office-holding positions in the government, including cabinet minister Eknath Shinde, who oversees the Urban Development Department (UDD).

“The ministers are duty-bound to uphold constitutional morality in their behaviour and work for the good of the citizens. However, it is unfortunate, that during the rainy season, when most urban areas face several issues, the UDD minister has ran away from his constitutional responsibility along with 37 MLAs. Such conduct interferes with the rights of the public,”

The petition goes on to note that the current growing season is vital for farmers and that a number of decisions must be made by the concerned Agriculture Minister; however, the current Minister, Dada Bhuse, is now in Guwahati.