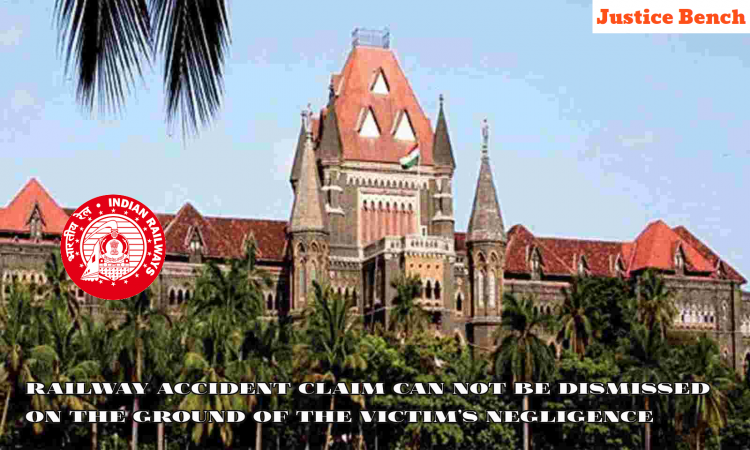 The Railways Act, 1989 is an Act of the Parliament of India which regulates all aspects of rail transport. The Act came into force in 1989, replacing the Railways Act of 1890.

The Bombay high court ruled while upholding a victim’s family’s claim held that Railway accident claims cannot be denied on the basis of the deceased’s negligence.

Further, The single-judge bench of justice MS Karnik stated that “The railways’ liability is based on the ‘no-fault theory,’” besides allowing the accident claim filed by family members. The diseased Roshanlal Tembhare died in a railway accident at Amgaon railway station in the Gondia district of the Vidarbha region on November 22, 2017.

The orders were passed by the court on April 28th, 2022, and stated that “The principle of contributory negligence cannot be invoked in such a case,” the said order was made public on Friday.

The Bombay high court reversed the Nagpur Railway Accident Claims Tribunal’s January 23, 2019 order, which rejected the family’s claim on the grounds that the man died as a result of his own negligent act in attempting to alight from a running train.

The railways claimed that the deceased died due to his own negligence and in support of their claim railways also examined the train guard. The Railways counterclaim was made After the deceased’s family filed an accident claim.

The guard claimed to have seen the deceased jump from the running train as it slowed down at Amgaon railway station, despite the fact that the train had no scheduled stop there.

The Nagpur Railway Accident Claims Tribunal accepted the railway’s position and determined that the man died as a result of a fall while attempting unsuccessfully to jump from a running train that had no scheduled stoppage at Amgaon Railway Station.

The court stated that it was not the Railways’ case that this was a suicide or attempted suicide. “At the highest level, it is a case of the deceased attempting to disembark from a train that had slowed down at the railway station, resulting in his death, which will have to be regarded as a ‘untoward incident’ entitling the victim to compensation,”.

Further, “The case will not fall under the proviso to Section 124-A of the Railways Act, 1989 (which establishes exceptional situations in which compensation is not payable to railway accident victims or their family members), merely on the basis of the victim’s negligence as a contributing factor.”