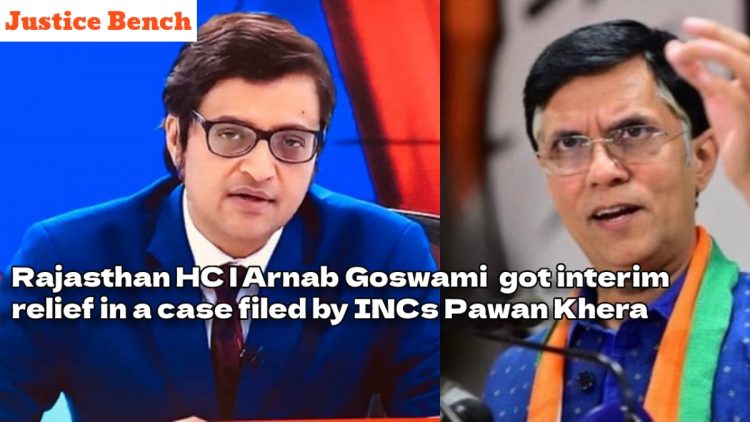 Republic TV Editor-in-Chief Arnab Goswami granted interim relief from arrest who has been booked under Section 153A of the Indian Penal Code for promoting enmity between religious groups in relation to certain news shows/broadcasts made by Republic TV.

On Friday the Rajasthan High Court granted interim protection from arrest to Republic TV Editor-in-Chief Arnab Goswami in a case registered against him under Section 153A of the Indian Penal Code (IPC) for promoting enmity between religious groups.

On May 17 the first information report (FIR) was registered against Arnab Goswami at Ambamata Police Station in Rajasthan’s Udaipur. The complaint was filed by Congress spokesperson Pawan Khera taking objections to certain news show/ broadcast made by Republic Bharat (Hindi channel of Republic).

Goswami approached the Rajasthan High Court seeking a quashing of the FIR.

The bench comprising Justice Sandeep Mehta heard the matter mentioned by Senior Advocate Mahesh Jethamalani. The court directed the police not to take any coercive steps against individuals named in the FIR.

The Court adjourned the matter and will be heard next on May 23.

The plea contented that the FIR is motivated and has been registered to harass and embroil Republic TV in legal cases.

“The current FIR has been filed at the behest of Mr. Pawan Khera who is the Spokesperson, All India Congress Committee and represents the Indian National Congress in various TV talk shows, discussions/debates that are held on different news channels etc. as per his own complaint. It must be noted that in a case where the Congress Government of the state of Rajasthan was being questioned, a member of the Congress has filed a complaint. This establishes how the entire case is motivated and made to harass and embroil a legitimate news network and its members in a litany of cases,”.

The issue arose when the news broadcast in question-related to the temple’s alleged demolition in Rajgarh and a demolition drive in Alwar.

On the other side, the counsel for Goswami stated that the said broadcasts were aimed to ensure communal amity rather than disturb it.

“In fact, the channels also covered how a Muslim Group had filed a complaint naming Congress Zilla Head Yogesh Mishra for vitiating harmony in the region. Therefore, far from causing strife, Republic was exposing it.”

On the Alwar demolition, the program had used the words ‘Jahangirpuri ka badla?’.

Accordingly, Arnab Goswami submitted that line was made not in reference to any community but to question if it was an apolitically motivated demolition drive.

“It is submitted that there was an uproar over a demolition drive in New Delhi’s Jahangirpuri on 20-21st April, 2022. This demolition was being done by the Delhi MCD which is headed by the BJP. Soon after, there was news of the Alwar Demolition in Rajashtan where there is a Congress government in power. Therefore, the question about “Jahangirpuri Ka Badla” were being raised in the context of it being a political battle over demolition,”.

the plea also highlighted that in the aftermath of the broadcast there was no disturbance of public order, establishing that the said broadcast did not threaten or disturb the peace on the ground in any way.

the plea contended that allowing the proceedings to continue will have a chilling effect on free speech and would be in violation of the freedom of speech and expression guaranteed under Article 19(1)(a).