Representation of People Act | Reexamination of the 48-hour campaign silence rule prior to election day is necessary; Gauhati High Court 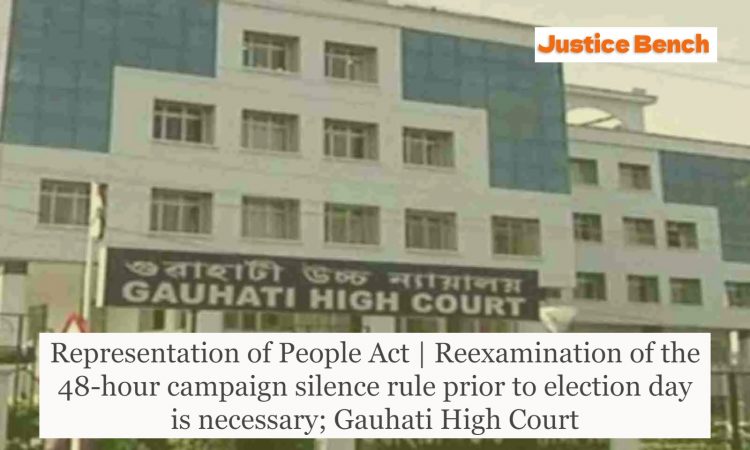 Representation of People Act | Reexamination of the 48-hour campaign silence rule prior to election day is necessary; Gauhati High Court

In the recent case of Dr. Himanta Biswa Sarma v. Election Commission of India and Others, the Gauhati High Court bench of Justice Rumi Kumari Phukan made the suggestion that Section 126 of the Representation of People (RP) Act, which prohibits campaigning and the publication of campaign material 48 hours prior to election day, be reexamined in light of the expansion of the digital arena and the fact that elections are held in multiple phases.

In this regard, the court ruled that when it comes to elections organised in several phases, there must be consideration of any violations of the 48-hour “silent time” of the model code of conduct (MCC).

“In the context of changing social scenario as well as the expansion of electronic/digital arena where the Election Commission itself has declared election in phased manner in certain constituencies, it is perhaps the high-time to re-visit the provision enunciated in the Section 126 of RP Act which was enacted far back in the year 1951,”

A 2019 case against Himanta Biswa Sarma, who is currently Assam’s chief minister, was dismissed by a single court because to suspected violations of Section 126 of the model code of conduct, which imposes a two-year prison sentence.

Sarma had moved the High Court to have the precedents and the entirety of the Kamrup(M) Chief Judicial Magistrate’s proceedings set aside (CJM).

The channel that aired Sarma’s interview the day before a portion of the State was set to cast ballots in the 2019 general elections was the target of the original complaint, which was made by another chief electoral officer of the State. Sarma was at the time an MLA.

The officer himself was listed as the only witness in the plaint, which asked for recognition under RP Act’s Section 126(1)(b) [show to the public any electoral matter by means of cinematograph, television, or other similar apparatus].

Even if the complainant did not appear in person before the CJM court in the future, the Magistrate on January 10 of this year gave notice to the Election Commission of India. The CJM on February 11 determined that a case had been established on the surface of the records, took cognizance, and summoned Sarma and the other defendants.

When Sarma failed to show up, the CJM fined him 2,000 and ordered him to appear in three weeks on February 25.

Senior Advocate Devajit Saikia, the counsel for Sarma, claimed that the trial court had not used its judgement and kept up with the jurisprudence on Section 126. It was emphasised that neither documents nor the initial request for them were made at the time the plaint was filed. Nearly three years after the alleged offence, the CJM continued to investigate the matter without the help of the initial complainant.

It was further argued that the restriction imposed by Section 126(b) of the Representation of the People Act only applied to polling places during the 48 hours leading up to the hour set for the polls to close for any election in such polling places.

Saikia asserted that the petitioner’s interview in the current case was broadcast on television in Guwahati, where there was no voting site scheduled to open within 48 hours as required by Section 126(1). (b).

It was argued that the proceedings are unlawful, irregular, and biassed because the plaint was allegedly filed at the request of Congress leaders. It was also mentioned that Rahul Gandhi, the leader of the Congress, was granted leniency in a case involving a violation of the dress code in 2017 and was the subject of this leniency.

In addition, it was alleged that the original complaint and ECI employees had concealed the position of the election authority in its response to Rahul Gandhi in the 2017 case. Concerns about Section 126’s enforceability in the digital era were highlighted in that response.

Following consideration of the reasons, the Court ruled that the CJM’s order exceeded its authority because the original complainant chose not to pursue the matter, making the complaint subject to dismissal for non-prosecution.

“Being an officer of justice delivery system, no one can conduct the affairs of the prosecution as an inquiry officer. As the original complainant did not pursue the matter nor produced the relevant documents, as directed, such a complaint is liable to be dismissed for non-prosecution u/s.203 CrPC and/or other relevant orders as to whether complainant has been able to make out a prima facie case for proceeding etc. But a court of law is never assigned to undertake an inquiry to pursue the matter with the higher authority as has been revealed from various orders of the court,”

As a result, the High Court determined that all of the CJM’s instructions were seriously invalid. The judge talked about how the Magistrate didn’t base his decisions on the appearance of the initial complainant before him or any proof.

The decision relies on a testimony made by Dr. SY Quraishi, a former election commissioner for India. The court decided to impose fine on Sarma in the absence of willful negligence on his behalf.

“The Magistrate has totally failed to discharge its judicial discretion while conducting a proceeding. The conduct of a judicial officer must be above the personal whims and traits and every order should be founded on cogent and reasonable grounds, which is not reflected in the present case. It is said ‘justice should not only be done but also seen to be done’,“

In light of the foregoing, the Court revoked the CJM’s order and quashed the case against Sarma.