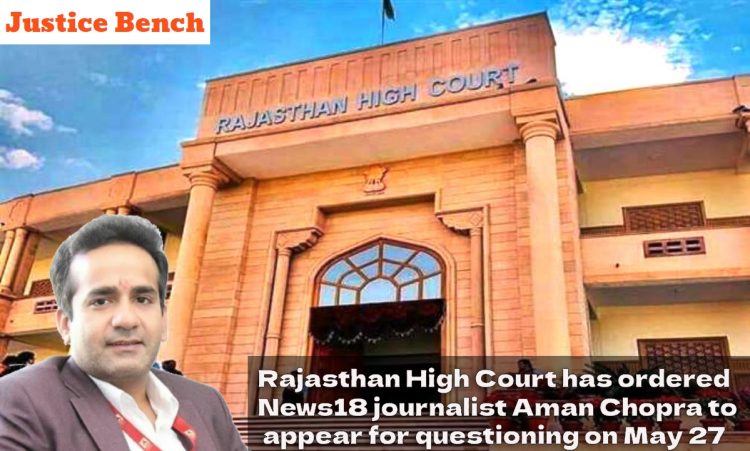 In Aman Chopra vs State of Rajasthan case The interim protection from arrest in two of the three FIRs filed against Chopra was ordered to be extended until the next hearing date on July 8.

The Rajasthan High Court ordered News 18 journalist Aman Chopra to appear before the Investigating Officer (IO) on May 27 for additional questioning in the Alwar riots.

When Justice Dinesh Mehta heard the case, the Special Public Prosecutor claimed that the investigation was inadequate and that more interrogation was required.

“The petitioner is hereby directed to appear before the Investigating Officer on 27.05.2022, for interrogation which shall take place between 10:30 a.m to 5:00 p.m. The petitioner shall be allowed 45 minutes break to have lunch etc,”

The interim protection from arrest in two of the three First Information Reports (FIRs) filed against Chopra was ordered to be extended until the next hearing date on July 8.

On the prior date of hearing, the Court prevented the IO from investigating accusations under Section 124A of the Indian Penal Code, citing the Supreme Court’s ruling suspending all outstanding Sedition proceedings.

The charge against Aman Chopra is that comments he made while anchoring a television show called Desh Jhukne Nahi Denge, which were also shared on his Twitter account, caused communal strife and violence on April 22 in Alwar.

Following that, three separate FIRs were filed against him.

Chopra filed an anticipatory bail motion in the High Court, citing the three different FIRs as grounds for detention. He claimed that the inquiry into the two subsequent FIRs should be stopped because they were filed intentionally in order to harass him.