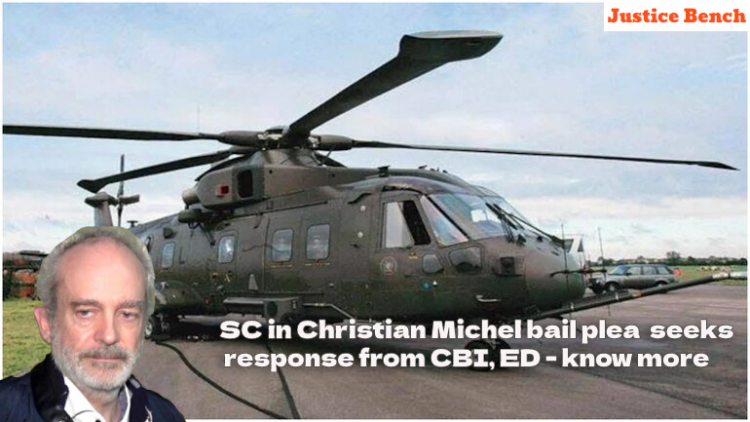 A Bench comprising Justices DY Chandrachud, Surya Kant and PS Narasimha remarked that the accused had already spent 4 years in prison and issued notice to CBI.

The court listed the matter for further hearing in the second week of July.

“He has already undergone 4 years almost and we will have to look (at the plea) from that perspective as well,“

Michel Counsel submitted that their case is covered under Section 436A of the Criminal Procedure Code (CrPC).

“I have undergone the maximum sentence as per the provisions. The investigation is still not complete. I have undergone 3 years and 6 months as of now and before extradition, I was in Dubai custody,“.

The counsel for Michel submitted

Responding to the Bench’s query, counsel responded that Michel had never absconded.

Enforcement Directorate (ED) represented by Additional Solicitor General (ASG) SV Raju has submitted that Michel had not been exonerated anywhere, and Section 436A did not apply to offenses being probed by the ED.

Michel’s contention that he is not even a party and his presence is needed in Italy since charges have been framed against him there, the ASG stated.

However, The Court proceeded to issue notice to CBI.

Earlier the Delhi High Court dismissed Michel’s bail plea after the court deemed him to be a flight risk.

Michel is accused of creating a paper trail to route kickbacks in the AgustaWestland VVIP chopper deal worth US$33 million, a 2013 helicopter bribery scam in which money was allegedly paid to middlemen and Indian officials in 2006 and 2007 to purchase choppers for politicians. The CBI had estimated the amount of bribes at US$33 million, transferred through bank accounts in the UK and UAE.