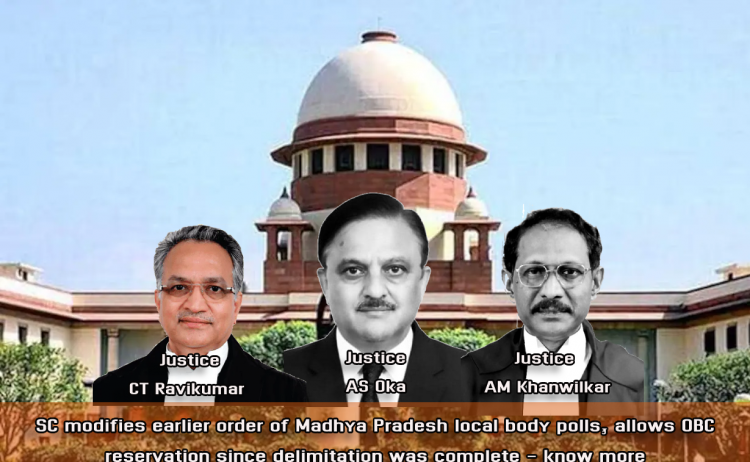 The Bench comprising Justice AM Khanwilkar in Suresh Mahajan vs State of Madhya Pradesh csae noted that the delimitation exercise was already complete and not ongoing at the time of its earlier judgment.

on Wednesday the Supreme Court modified its May 10 judgment that had directed that notification of pending local body polls in the State of Madhya Pradesh should be done without delimitation for Other Backward Classes (OBC) seats.

The Bench comprising Justice AM Khanwilkar, Justice AS Oka, and Justice CT Ravikumar noticed the fact about the delimitation exercise in the State was not ongoing but had already been completed and notified before May 10. The modification of the court’s earlier judgment came to light of these facts.

“For the time being, we permit the Madhya Pradesh State Election Commission to notify the election programme for the respective local bodies keeping in mind the delimitation notifications already issued by the State Government as on this date, i.e., till today; and also the Reports submitted by the dedicated Commission, referred to above. The State Election Commission shall ensure that the election programme is issued in respect of local bodies where elections are overdue without any loss of time keeping in mind the feasibility of conducting elections owing to impending monsoon,“

The top court took note of submissions that a second report had been submitted by the Commission to look into delimitation for OBCs, and the said report incorporates the needs of meeting the triple test.

In this regard, the order stated,

“We also permit the State of Madhya Pradesh to notify the reservation pattern local body wise as delineated in the Reports of the dedicated Commission, to be adhered to by the State Election Commission. That be done within one 5 week from today. The State Election Commission shall issue election programme in respect of concerned local bodies thereafter within one week. The directions given in order dated May 10, 2022 stand modified to the above extent.“

Earlier this month the Supreme Court asked the Madhya Pradesh State Election Commission to conduct pending local body polls in the State without any delay, and as per the seat allotment in place prior to the ongoing delimitation exercise.

The supreme court had noted that conducting such polls every five years is a constitutional obligation.

The Court also held that a hiatus with regard to elections is permitted only when local bodies are dissolved a little before the end of their tenure. but in Madhya Pradesh State polls are pending for over 23,000 local bodies.

The court further said citizens are entitled to have newly-elected members in all bodies before their 5-year tenure ends.

Accordingly, in lite of the above contentions, the may 10 judgment was passed.

The judgment had also made it clear that the interim directions are for all States where local body polls may be pending.

The polls to these bodies were kept on hold citing the pendency of the case before the supreme court regarding the Madhya Pradesh government’s decision to reserve seats for Other Backward Classes (OBCs) in local bodies.

In December 2021 the Supreme Court stayed the State’s decision for not complying with the triple test laid out in Indra Sahwney while providing for such reservation.

The Bench reiterated that such an exercise cannot be cited as a legitimate ground to stall polls and disrupt governance in its May 10 judgment.

to this effect, the supreme court directed the State Election Commission to re-notify the OBC-allocated seats for the general category in compliance with the triple test.