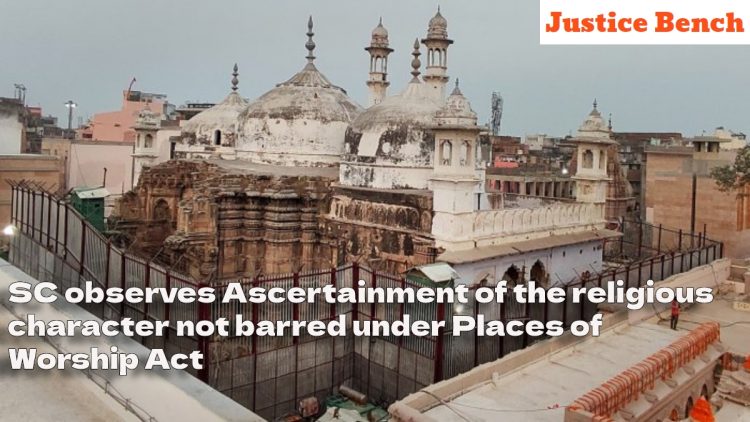 The Bench comprised Justice DY Chandrachud during the hearing of the Gyanvapi-Kashi Vishwanath case made the remark ascertainment of the religious character of a place of worship.

The Supreme Court on Friday made crucial observations with regard to cases on the nature and character of religious structures in the country, orally remarked that the Places of Worship Act, 1991 does not bar the ascertainment of the religious character of a place of worship.

The remark was made by Justice DY Chandrachud during the hearing of the Gyanvapi-Kashi Vishwanath case.

“Ascertainment of religious character is not barred under Section 3 of the 1991 Act. Suppose there is a Parsi temple and there is a cross in the corner of the area. Does the presence of Agyari make the cross Agyari or Agyari Christian? This hybrid character is not unknown,”.

However, Senior Counsel Huzefa Ahmadi, who was appearing for the Muslim party, contested the same.

“It is strongly in dispute,” the lawyer for Hindu parties retorted.

“You may think so. If this is entertained, then the 1991 Act may be only a dead letter. This is the controversy the Act wanted to avoid,”.

Ascertainment of religious character is not barred under Section 3 of the 1991 Act.

The Places of Worship Act of 1991, which was introduced at the height of the Ram Janmabhoomi movement, seeks to protect the status of all religious structures as they stood on August 15, 1947.

Section 4 of the Act states that the religious character of a place of worship existing on August 15, 1947 shall continue to be the same as it existed on that day.

The act bars courts from entertaining cases filed over the character of such places of worship. The provision further states that such cases already pending in courts would stand abated.

However, if any suit or proceeding is instituted on the ground that conversion of the religious character of a place of worship has taken place after August 15, 1947, then such case has to be disposed of in a manner that the character existing on August 15, 1947, is restored.

the Muslim party has been opposing the suit relating to the Gyanvapi Mosque on the ground that the civil court which is hearing the case is barred from doing so in view of the 1991 Act.

The Supreme Court has now asked the District Judge, Varanasi to decide the suit including its maintainability.