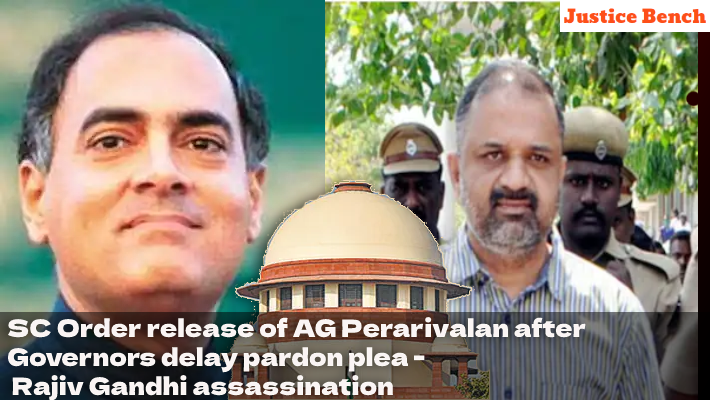 The Supreme Court bench comprising Justices L Nageswara Rao, BR Gavai and AS Bopanna exercised its powers under Article 142 of the Constitution to order the release of Perarivalan.

On Wednesday The Supreme Court in AG Perarivalan Vs State of Tamil Nadu case ordered the release of AG Perarivalan, the convict in the assassination of former Prime Minister Rajiv Gandhi.

A bench comprising Justices L Nageswara Rao, BR Gavai, and AS Bopanna exercised its powers under Article 142 of the Constitution to order Perarivalan’s release. The Bench noted that there was considerable delay by the Governor of Tamil Nadu in deciding the convict’s plea for remission under Article 161.

“State cabinet had taken its decision (to grant remission) based on relevant considerations. In exercise of Article 142, it is appropriate to release the convict,”

The main issue that escalated before the apex court was regarding the power of the Governor to refer such petitions to the President of India when the State Cabinet had already given its recommendation for remission or pardon.

The convict was prompted to approach the Court when the Governor had refused to take a call on Perarivalan’s plea under Article 161 of the Constitution.

The Supreme Court held that an exercise of powers by the Governor under Article 161 cannot have an inexplicable delay and it can be subjected to judicial review.

“As per Maru Ram judgment, the Governor is a mere handle. We are not impressed to remand back the matter to the Governor,”.

the apex court made it clear

AG Perarivalan was convicted and sentenced to death when he was 19 for aiding in making the bomb responsible for the assassination of Rajiv Gandhi.

The apex court had commuted his death sentence to life imprisonment on the ground of delay in deciding mercy petitions in 2014.

Subsequently, he applied to the Governor for pardon and remission of his sentence on December 30, 2015.

After considerable three years, in September 2018, the Supreme Court asked the Governor to decide the pardon plea as he “deemed fit”. Three days later, the Tamil Nadu Cabinet recommended to the Governor, to remit Perarivalan’s sentence and release him forthwith.

But the Governor is yet to take a call on the same stating that the President is the competent authority when it comes to remission of sentence of convicts.

The Supreme Court In November 2020 stated that the investigation into the assassination need not deter the Tamil Nadu Governor from deciding the plea for pardon of convicts like Perarivalan who have been serving their sentence in jail for over two decades.

The situation further remain unresolved when the Governor had maintained that the President is the competent authority to take a call on remission.