SC/ST Act, caste abuse must be hurled in a public place or in public view to be an offense; Karnataka High Court 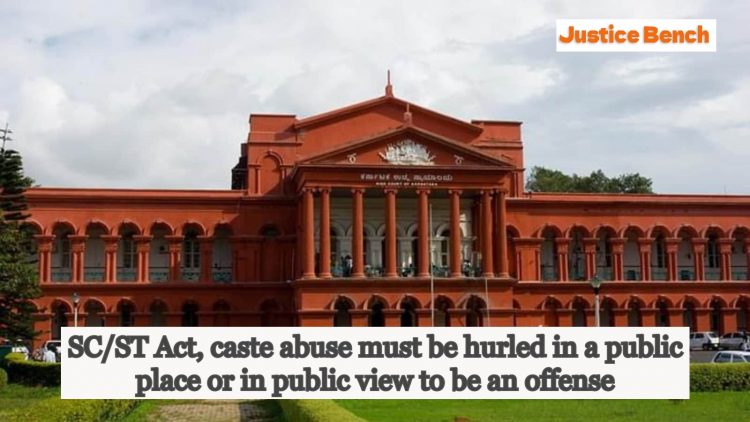 SC/ST Act, caste abuse must be hurled in a public place or in public view to be an offense; Karnataka High Court

According to a recent ruling by the Karnataka High Court bench of single-judge Justice M Nagaprasanna in the case of Rithesh Pais v. State of Karnataka & Another, hurling casteist insults only becomes a crime punishable under the Schedule Caste and Schedule Tribe (Prevention of Atrocities) Amendment Act, 2015, SC/ST Act if it is done in a public place or a place of public view.

The court quashed a case filed under the SC/ST Act against one Ritesh Pais who was accused of hurling casteist insults against one Mohan in a building’s basement, observing that under Sections 3(1)(r) and 3(1)(s) of the SC/ST Act, what is necessary to establish an offence is that hurling of insults is done either in a public place or a place of public view.

The petitioner questioned the ongoing proceedings before the V Additional District & Sessions Judge, DK, Mangalore for offences under Sections 3(1)(r), 3(1)(s), and 3(2)(va) of the SC/ST Act and the Indian Penal Code, in which he was accused of abusing the complainant in the basement of a building where the complainant was employed. He is also accused of intimidating the plaintiff and impeding work being done on the building.

All of the witnesses, including the complainant, were co-workers of one Jayakumar R. Nair, and the petitioner claimed that he had previously filed a civil suit against Nair and that the injunction from that litigation was still in effect.

In order to settle a score against the petitioner, it was argued that Nair had set up his employee to submit the current complaint.

The complainant’s advocate, however, stated that the incident happened in front of other employees who are witnesses in the case. It was further argued that the alleged casteist insults were shouted in a basement where no onlookers were present.

The bench noted that two considerations needed to be made after reviewing the opposing arguments: the building’s basement was not a public area, and the only people who claimed to be there were the complainant and other Jayakumjar R Nair workers or associates of the complainant.

The Court cited the Supreme Court’s decision in Hitesh Verma v. State of Uttarakhand, in which the highest court had interpreted the same provisions invoked against the petitioner in the present case, and explained the scope of “public place” and “public view,” concluding that the hurling of insults was clearly not in a place of public view or a public place for the provisions of the SC/ST Act to be attracted.

Applying the same, the bench dismissed the proceedings now being heard by the V Additional District and Session Judge and stated that allowing additional proceedings to proceed would turn into harassment and produce an injustice.

While the respondents were represented by Ajay Prabhu, BS Sachin, and High Court Government Pleader KS Abhijit, the petitioner was represented by Senior Counsel Sandesh Chouta and advocate Lakshmikanth G.