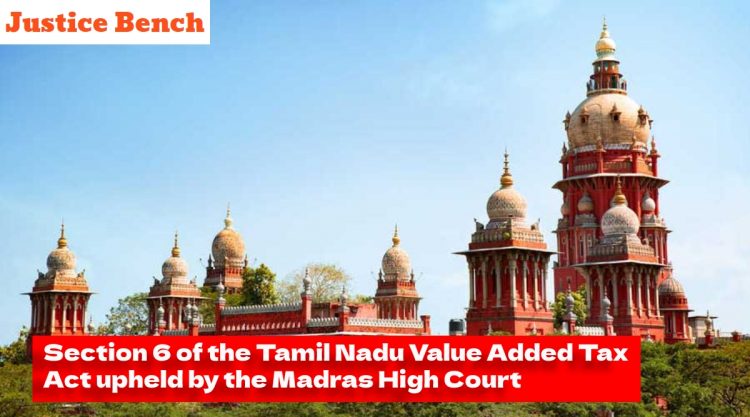 The Madra High Court Bench comprising  Justices R Mahadevan and Mohammed Shafiq in the case of M/s LG Electronics India v The State of Tamil Nadu said that the legislature has sole authority over the economic rationality of a tax.

The Madras High Court recently confirmed the constitutional validity of Section 6 of the Tamil Nadu Value Added Tax Act, 2006, which had been challenged by works contractors as violating Articles 14, 19(1)(g), 20, 301, and 304 (a) of the Constitution.

The economic wisdom of a tax is solely the domain of the legislature, stated the bench of Justices R Mahadevan and Mohammed Shafiq.

“It is not the function of the court to consider the propriety or justness of the tax or enter upon the realm of legislative policy,”

As a result, the Court maintained the provision declaring that while determining the constitutionality of a taxing act, the hardship caused to an individual or a group of people is irrelevant.

“The legislature in fiscal matters, enjoys a greater latitude and must be permitted to experiment. The presumption is always in favour of the constitutionality of a provision and the courts must seldom interfere,”

Certain constraints to a composition method through which dealers engaged in works contracts could discharge taxes were challenged.

Only those contractors who did not conduct inter-state transactions, receive commodities from outside the state, or imports/goods from outside the country were allowed to participate in the composition system. This requirement was deemed arbitrary, discriminatory, and in violation of Article 14.

The Court, on the other hand, disagreed with the petitioners, noting that works contractors were just a genus with various features or species. Despite being works contractors, it was determined that dealers who acquired products locally and those who purchased items via interstate purchase or import were not on an equal footing.

“According to us, “works contractor” does not constitute a homogeneous class, but comprises different species. Works contractor can only be considered as a genus with different facets or species,”

The division bench considered the scope of judicial interference in fiscal concerns and concluded that the legislature had sole authority over the economic sense of a tax.

The bench emphasised that it was not the court’s role to examine the tax’s fairness.

With this, it was determined that the classification under Section 6 had a purpose, and that the enactment did not violate any constitutional rights, hence the petitions challenging Section 6’s vires were dismissed.