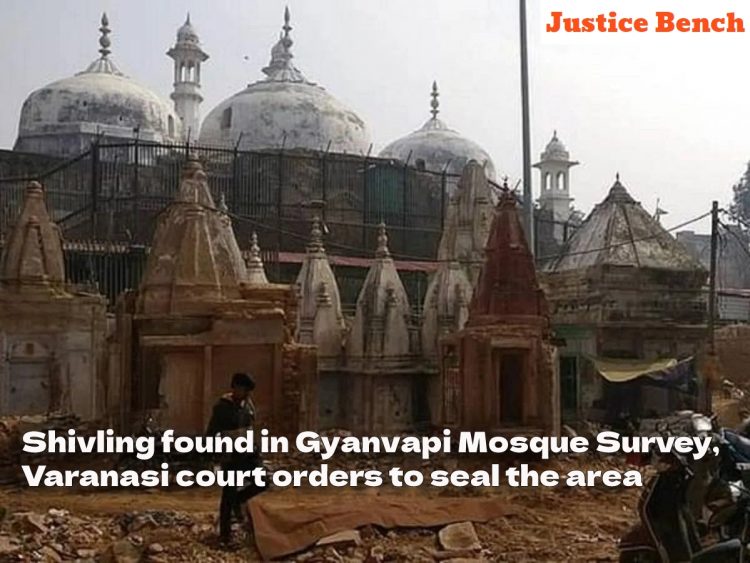 Application under 78 G is allowed. The District Magistrate, Varanasi is ordered to seal the place where the Shivling has been recovered with immediate effect and the entry of any person is prohibited in the sealed place.

The Varanasi Court has ordered the area where the idol was found, to be sealed, India Today reported. The decision came up after videography of Gyanvapi mosque discovered a Shivling (idol of Lord Shiva) inside mosque premises,

Senior Division Judge Ravi Kumar Diwakar ordered the District Magistrate, Varanasi to seal the area where the Shivling was found and to prohibit the entry of people into the area.

that the District Magistrate, the Police Commissioner, and the Central Reserve Police Force (CRPF) to ensure that the sealed area is safe.

A suit was filed in a lower court by Hindu parties claiming that the mosque houses Hindu deities and that Hindus should be allowed to do worship and puja at the site and the order was passed in the suit.

The plaintiff’s counsel Harishankar Jain contended that Shivling has been recovered after the survey and the area should be sealed immediately, orders were passed after the contention of the plaints advocate.

The survey and videography of the site were conducted by a commissioner appointed by the lower court earlier. The same was challenged before Allahabad High Court which dismissed the appeal on April 21.

The development comes a day before the appeal is listed to be heard by the Supreme Court which was filed by the Muslim party Committee of Management of Anjuman Intezamia Masajid, challenging the videography and survey itself.

Besides, the Masajid Committee filed a plea before the lower court claiming that the court commissioner was biased and should be replaced which was dismissed on Thursday this week paving way for the survey.

Meanwhile, an appeal has been filed before the Supreme Court against the April 21 order of the Allahabad High Court permitting the survey.

The appeal is slated to be heard by a bench of Justices DY Chandrachud and PS Narasimha on Tuesday.