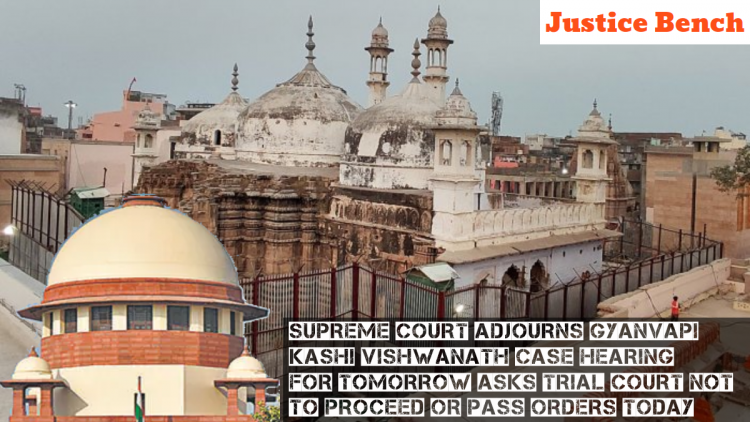 The bench comprising Justices DY Chandrachud and PS Narasimha in the Gyanvapi-Kashi Vishwanath acceded to the request by the Hindu party to adjourn the case but directed that the trial court should not hold proceedings or pass any order today and posted the hearing for tomorrow.

the bench of Justices DY Chandrachud and PS Narasimha in the Gyanvapi-Kashi Vishwanath case acceded to the request by advocate Vishnu Shankar Jain but directed that the trial court should not hold proceedings or pass any order today. The counsel for Hindu parties sought deferment accordingly the Court adjourned the hearing today and posted it for tomorrow.

“It has been prayed by petitioners that proceedings before trial court should not proceed and Mr Jain agrees. We accordingly direct trial court to strictly act according to the arrangement as here and it should desist from passing any orders,”.

The direction was passed after Senior Counsel Huzefa Ahmadi appearing for the Muslim party highlighted that proceedings before the trial court are going on and an application has now been filed to demolish a wall near the Wazu Khana.

“There are applications now for sealing other mosques,”.

“Mr Jain please inform your local counsel there not to proceed. The trial judge does not have a ticker tape there (laughs),”.

Tomorrow the matter will be heard at 3 pm by a bench comprising three judges.

The appeal was filed by the Committee of Management of Anjuman Intezamia Masajid challenging an order of the Allahabad High Court permitting a court commissioner appointed by a civil court in Varanasi to inspect and conduct a survey and videography of the Gyanvapi Mosqueover which Hindus and Muslims have laid claims for the right to worship.

The Varanasi court had passed an order on May 16 ordering sealing off an area of the mosque after counsel for the Hindu parties Harishankar Jain contended that a Shivling has been recovered during the survey.

A suit was filed by Hindu parties claiming that the Gyanvapi Mosque houses Hindu deities and that Hindus should be allowed to worship and do puja at the site.

In the Suit, before the Varanasi court, the court had appointed a court commissioner to conduct a survey and videography of the site.

An Appeal was filed challaning order of Varanasi court before Allahabad High Court, which dismissed the appeal on April 21.

Subsequently, the Masajid Committee filed a plea before the lower court claiming that the court commissioner was biased and should be replaced. The same was dismissed, paving the way for the survey to take place.