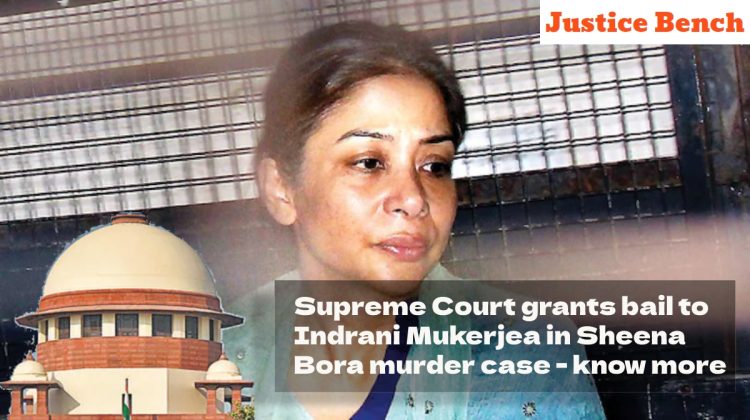 The bench of Justices L Nageswara Rao, BR Gavai and AS Bopanna remarked We are granting bail to Indrani Mukerjea. 6.5 years is too long a time,“ before passing another order releasing her from jail.

On Wednesday the Supreme Court has granted bail to Indrani Mukerjea in the murder case of her daughter, Sheena Bora.

Indrani is the prime accused in the murder case of Sheena Bora.

A bench comprising Justices L Nageswara Rao, BR Gavai and AS Bopanna observed that Mukerjea has been in jail for 6.5 years.

“We are granting bail to Indrani Mukerjea. 6.5 years is too long a time,“

The court remarked and passed an order releasing her from jail

The Court further refrained from making any observations on the merits of the case but said that the trial is unlikely to end soon.

“Indrani Mukherjea has been in custody for 6.5 years. We are not making comments on merits of case. Even if the 50 percent witnesses are given up by prosecution, the trial would not be over soon. She is granted bail. She will be released on bail subject to satisfaction of trial court. The same conditions imposed on Peter Mukherjea will also be imposed on her,”.

Mukerjea was accused and arrested in 2015 and charge-sheeted as accused of offences punishable under Sections 120B (criminal conspiracy), 364 (kidnapping), 302 (murder), and 201 (destruction of evidence) of the Indian Penal Code.

The CBI’s contention is that Bora was murdered by Mukerjea with the help of her former husband Sanjeev Khanna, present husband Peter Mukerjea, and driver Shyamvar Rai.

The Bombay High Court had rejected Mukerjea’s bail plea in November 2021 which has prompted the present appeal before the apex court.