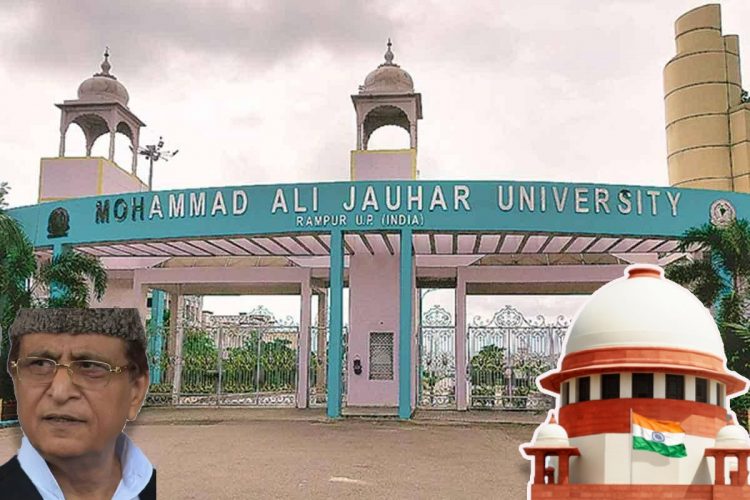 The Supreme Court comprising the bench of Justices DY Chandrachud and Bela M Trivedi on Friday in the case of Azam Khan v State of Uttar Pradesh termed such a condition imposed by the High Court is “disproportionate” and has no rational connection to securing the accused’s presence.

As part of the interim bail restrictions set on senior Samajwadi Party leader Azam Khan, the Supreme Court on Friday stayed an order by the Allahabad high court for the District Magistrate to take control of the land belonging to Jauhar University.

The High Court had ordered the “demolition” of the University of which Khan is Chancellor, and the district government wanted to carry it out, which was informed to a bench of Justices DY Chandrachud and Bela M Trivedi.

The Bench stated that the bail condition appears to be disproportionate and that it exceeds the boundaries for granting bail under Section 439 of the Code of Criminal Procedure.

“Prima facie conditions imposed for grant of bail are disproportionate and has no reasonable link to the means to secure presence of accused. Para 40 of the High Court order has stated that order may look like a decree in a civil suit yet the High Court while imposing conditions for grant of bail has exceeded the settled parameters laid down in Section 439 of the Criminal Procedure Code. Issue notice. Till next date of listing the High Court direction in para 39 (1) of its impugned order shall remain stayed,“

The Allahabad High Court had directed the Rampur District Magistrate to take possession of the property attached to the campus of Jauhar University by June 30, 2022, and raise a boundary wall with barbed wire around it, while granting interim bail to Khan in a case of alleged grabbing of an opponent’s property.

Khan must also handover all enemy property to paramilitary forces and submit a personal bond of one lakh rupees and two sureties in the same amount, according to the High Court.

It stated that after the above-mentioned exercise of gaining control of the land is completed, Azam Khan’s interim bail will be converted to normal bail.

The status of the land on which the University is built is the subject of a writ petition in the High Court between the Waqf Board and the custodian of the land, according to Senior Advocate Kapil Sibal, who represented Khan before the Supreme Court. According to him, the petition has been placed on hold.

Despite this, he claimed, the single-judge had ordered that the land be turned over to the caretaker as a condition of bail.

Khan had been in jail since February 2020, facing nearly a hundred criminal accusations ranging from buffalo and goat theft to land grabbing and electricity theft, until he was recently granted interim bail.

Khan was detained at the Sitapur Jail despite the fact that the Allahabad High Court had granted him bail in various cases. Orders in other bail applications by Khan have been reserved but not yet pronounced.

Khan’s request for temporary relief to campaign for the upcoming Uttar Pradesh assembly elections was denied by the Supreme Court in February.

Khan’s lawyer was also instructed by the Supreme Court to first obtain bail from the High Court.

Khan has been granted bail in 84 of the 87 allegedly politically motivated cases filed against him, according to the bail petitions filed by counsel Lzafeer Ahmad BF.

The Supreme Court earlier this month took issue with new complaints being filed against the veteran Samajwadi Party politician every time he was granted bail by a court.

Khan was then granted interim bail in an alleged cheating case by the Supreme Court on May 19, clearing the door for his release from prison.