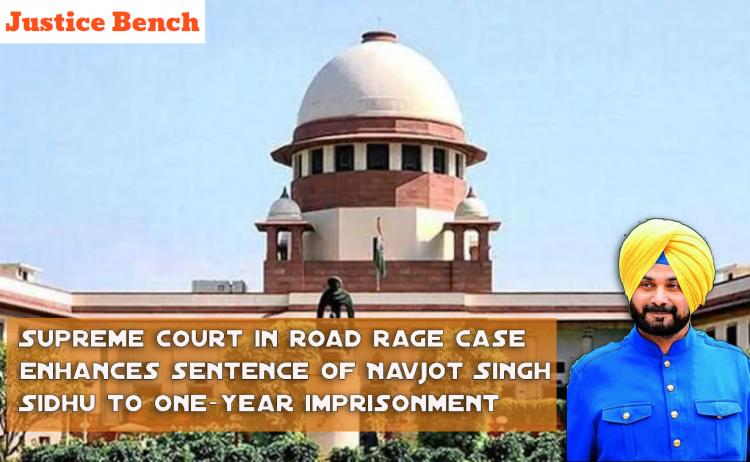 The Supreme Court sentenced Navjot Singh Sidhu to one-year imprisonment by allowing the review petition filed in this regard challenging the Supreme Court’s 2018 judgment that had reduced the punishment imposed on him in a 1988 road rage case from 3 years imprisonment to aINR 1,000 fine.

On Thursday The Supreme Court in the case of Jaswinder Singh (Dead) through Legal Representative v. Navjot Singh Sidhu and Others passed orders sentencing Congress leader and former Indian cricketer Navjot Singh Sidhu to one year imprisonment in a 1988 road rage case.

“We have allowed the review application on the issue of sentence. In addition to fine imposed, we impose a sentence of imprisonment of one year to be undergone by the respondent,”.

The victim had allegedly died after a physical assault by Sidhu and others in a 1988 road rage case, and the deceased victim’s son filed a review petition challenging the 2018 supreme court order admitted in the same year.

On the other hand, respondent Sidhu has submitted that the petitioner has attempted to “re-appreciate the entire evidence on record which is neither permissible not necessary, considering the impugned order has dealt with every aspect of the case, including the medical evidence, with great care and detail”.

Further, Sidhu has also cited his “active public life” and impeccable “sporting career” as grounds in the affidavit.

“Sidhu has had an active public life with an impeccable record as a parliamentarian wherein he has worked for the welfare of not only the citizens of his constituency but the public at large,”.

The Supreme Court reduced sentence of Sidhu from 3 years imprisonment to fine of Rs. 1000 for the offence of voluntarily causing hurt under Section 323 of IPC.

The Punjab & Haryana High Court held him guilty of culpable homicide not amounting to murder which was set aside by the Supreme court. The High Court had awarded Sidhu and another accused three years’ imprisonment and a fine of ₹1 lakh each.

The pretext of the case was that in December 1988, the victim and the appellants got into a heated exchange over a vehicle belonging to the appellants which was allegedly parked in the middle of the road.

This exchange, according to the prosecution, led to a physical assault on the victim, who was pronounced dead when he was taken to the hospital. It was claimed by the prosecution that Sidhu had fled the scene of the crime.

The appellants were acquitted in 1999 on the grounds that the death of the victim was caused due to cardiac arrest and not due to the injuries sustained in the assault by the lower court. This acquittal, however, was set aside by the Punjab and Haryana High Court in 2006, which found the appellants guilty of culpable homicide not amounting to murder.

Further, In the year 2007, the Supreme Court had stayed Sidhu’s conviction and had granted him bail.