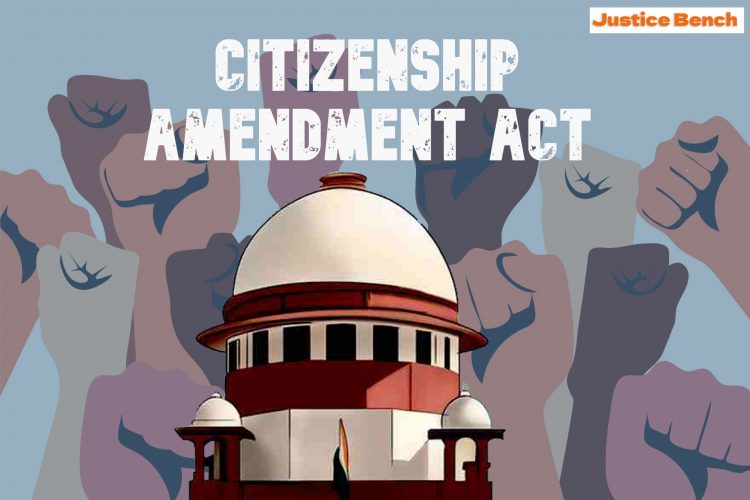 In order to facilitate the advancement of arguments by counsel, the Supreme Court on Monday issued a number of orders compartmentalising a group of pleas against the Citizenship Amendment Act, 2019 (CAA).

The matter was postponed by a bench consisting of Chief Justice of India UU Lalit and Justice S Ravindra Bhat, who also ordered the Central government to respond within four weeks of the compartmentalization.

The Solicitor General of India (SG) was instructed to compile a comprehensive list of all cases involving the subject, which would then be separated, by the Bench.

Additionally, it was mandated that the lead case be designated and convenience compilations be created following the filing of the Central government’s answer.

The CAA, approved on December 12, 2019, modifies the definition of “illegal migrants” in Section 2 of the Citizenship Act of 1955.

Section 2(1) has a new proviso that has been introduced (b). According to the same, people from Afghanistan, Bangladesh, or Pakistan who are members of Hindu, Sikh, Buddhist, Jain, Parsi, or Christian communities and who have received a waiver from the Central government under the Passport (Entry into India) Act of 1920 or the Foreigners Act of 1946 are not to be considered “illegal migrants.” As a result, they are qualified to seek for citizenship under the 1955 Act.

The CAA expressly left the Muslim minority out of the proviso, igniting nationwide demonstrations and leading to the filing of numerous applications with the Supreme Court.

According to the petitioners who are contesting the law, the CAA discriminates against Muslims based on their faith. It has been argued that this type of religious segregation breaches Article 14’s guarantee of equality because it lacks any justifiable discrimination.

The Supreme Court had given notice in a batch of more than 140 petitions in January 2020, despite widespread opposition to the legislation rallies, without stopping the Act.

Later, the Court made a suggestion that a Constitution Bench might hear the case, but no order was made to that effect.

The Central government had responded to the requests by claiming that the CAA is a “benign legislation” with a specific goal and should not be confused outside of its intended scope.

On October 31, 2022 the case was listed for directions