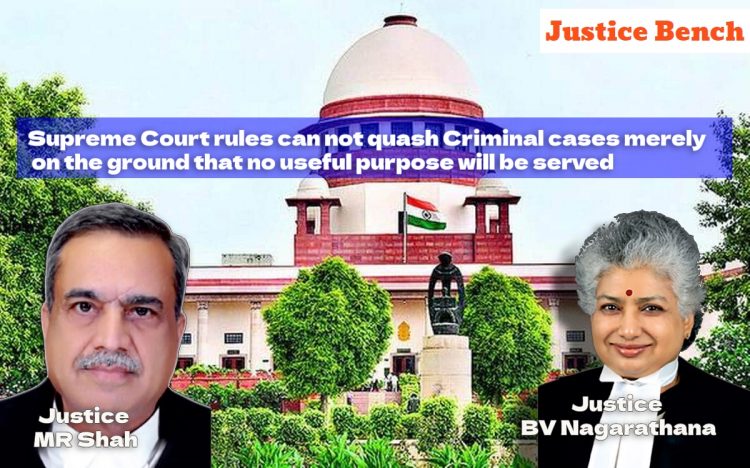 The Division Bench comprising Justices MR Shah and BV Nagarathna in Supreme Court held that a High Court while disposing of an application under Section 482 CrPC must give a speaking or reasoned order.

On Tursday the Supreme Court in Satish Kumar Jatav v. State of Uttar Pradesh and Others case observed that when a clear case is made out for the offenses alleged, criminal proceedings cannot be quashed merely on the ground that ‘no useful purpose will be served’ by prolonging the proceedings of the case.

The Division Bench comprising Justices MR Shah and BV Nagarathna while hearing an appeal assailing the decision of the Allahabad High Court which in the exercise of its powers u.s 482 of the Code of Criminal Procedure (CrPC), had quashed the criminal proceedings against the respondent-accused persons.

The respondents were accused of committing offenses under Sections 307, 504, and 506 of the Indian Penal Code and and Section 3(10)(15) of the Scheduled Castes and Scheduled Tribes Act (Prevention of Atrocities) Act.

504 – Intentional insult with intent to provoke breach of the peace

The Bench after affirming the arguments raised by the appellant at the outset observed that the order passed by the High Court was unsustainable both in law as well as on facts since apart from dictating the submission of parties, there was no further discussion by the High Court on the allegations made against the accused persons and even on the legality and validity of the order passed by the Magistrate summoning the accused.

“The impugned judgment and order passed by the High Court is a cryptic, non-reasoned order,”.

The apex court observed that the approach of the High Court was cursory and casual.

“We find no independent application of mind by the High Court on the legality and validity of the order passed by the learned Magistrate summoning the accused. The manner in which the High Court has disposed of the application under Section 482 Cr.P.C. and quashed the criminal proceedings is not appreciated at all,”.

Therefore the apex court set aside the decision of the Allahabad High Court.