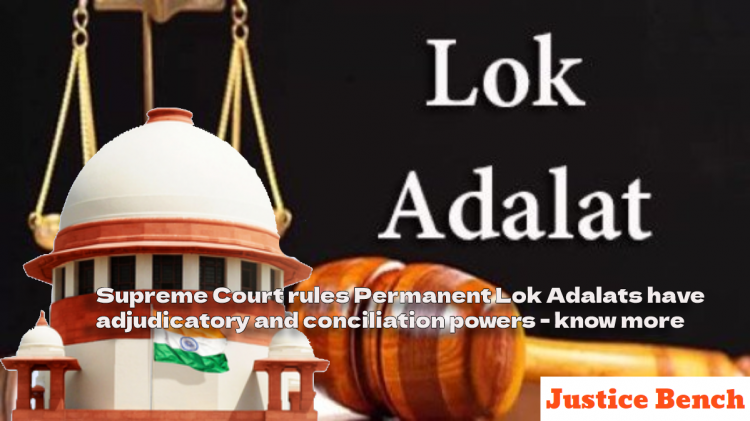 The Supreme Court in the case of Canara Bank v. G S Jayarama held that Permanent Lok Adalats must first attempt to resolve the dispute, and only if no agreement can be reached between the parties can the matter be decided on the merits.

On Thursday the Supreme Court held significantly that Permanent Lok Adalats have both conciliatory and adjudicatory powers.

The Bench comprising Justices DY Chandrachud and PS Narasimha held that while dealing with a case, Permanent Lok Adalats must first attempt to resolve the dispute, and only if no agreement can be reached between the parties can the matter be decided on the merits.

“Only if the parties fail to reach an agreement on the fifth step, can the Permanent Lok Adalat proceed to the final step and decide the dispute on its merits,”.

The Court was hearing a petition challenging a March 6, 2021 verdict of the Karnataka High Court, which declared that the Permanent Lok Adalat (PLA) lacks adjudicatory powers.

In dealing with the case, referred to the provisions of the Legal Services Act of 1987, which establishes Lok Adalats and PLAs, as well as their powers and roles.

According to the circumstances of the case, the appellant bank filed an application with the Lok Adalat to resolve a dispute with the respondents, who had defaulted on a loan of INR 2.40 lakh.

However, because the defendants did not take part in the proceedings before the Lok Adalat, an ex-parte order was issued requiring them to pay the sum plus 9% interest.

The award was challenged before the Karnataka High Court, which allowed the respondent’s writ petition. The bank appealed the ruling to a Division Bench, which denied the case with the same conclusion that the PLA lacks adjudicatory powers.

The Division Bench further pointed out that the PLA in this case skipped over conciliation and went straight to adjudicating the dispute.

The Supreme Court said that the High Court’s findings were incorrect while deciding the appeal against this verdict,. Distinguishing between the powers of a Lok Adalat and a Permanent Lok Adalat, the Court said,

“The Act indicates that there are similarities between Lok Adalats and Permanent Lok Adalats: (i) they can both attempt conciliation proceedings with the parties before them, and can pass awards recording the terms of settlement agreed upon by the parties (ii) in doing so, they are both bound by principles of justice, equity, fair play and other legal principles and (iii) their awards, deemed to be decrees of courts, will be final and cannot be challenged in an appeal. Yet, despite these similarities, there are crucial differences under the statute,”.

Despite their similar levels of power, the PLA is said to have wider authority than the Lok Adalat. If the parties are unable to reach an agreement, the PLA should continue to try to resolve the issue and even assist in the drafting of settlement agreements, according to the Court. The PLA can only adjudicate the issue on its merits under Section 22-C(8) of the Legal Services Act if the party present before the PLA does not agree or does not respond in a reasonable amount of time.

The judgment went on to state that the PLA cannot bypass this step and that the conciliation proceedings under the Act are mandatory.

Moreover, the Supreme Court held that the verdict by High Court was incorrect in holding that the PLA doesn’t have adjudicatory powers, and was correct only to the extent wherein it noted that the PLA in the present case didn’t follow the conciliation proceedings and directly jumped to deciding the matter on merits.