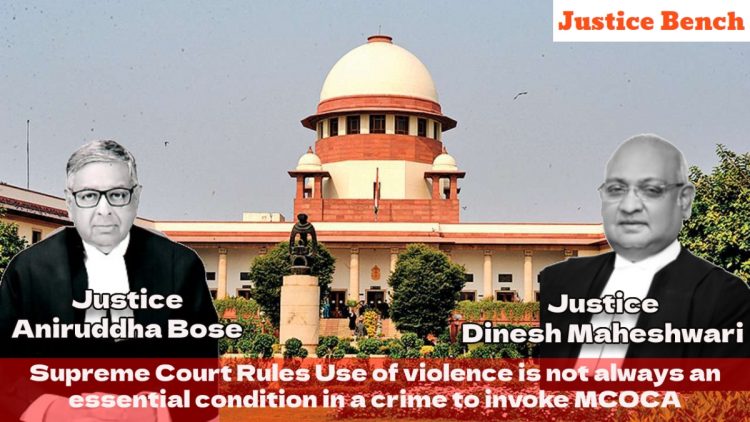 The Supreme court in the case of  Abhishek vs State of Maharashtra held that there may be an advantage to committing a crime that is not immediately related to pecuniary gain, but rather to gaining a strong hold or domination in society.

The Supreme Court ruled last week that actual use of violence is not always a sine qua non (necessary requirement) for activating sections of the Maharashtra Control of Organized Crime Act (MCOCA).

The division bench comprising Justices Dinesh Maheshwari and Justice Aniruddha Bose ruled that threat of violence, intimidation, coercion would fall within the ambit of ‘organised crime’ under MCOCA.

Apart from that, the Court stated that the employment of other illegal measures would be included in the same mischief.

The Court was hearing a criminal appeal against a decision of the Bombay High Court’s Nagpur bench dismissing Abhishek’s plea challenging the invocation of MCOCA against him.

Abhishek and others were charged with kidnapping a restaurant owner in Nagpur for a ransom of Rs. 20 lakh in a criminal case filed on May 8, 2020.

Following this, the police authorities granted permission to charge the accused under the MCOCA, citing their “continued criminal activity” as Abhishek has been identified in several cases of violence.

Abhishek stated in his defence that the authorities misused MCOCA against him and misinterpreted the special enactment’s requirements.

The Court stated that the authorities’ rigorous adherence to MCOCA provisions cannot be stretched beyond common sense and practical requirements.

“Strict adherence by the authorities concerned to the requirements of MCOCA also cannot be stretched beyond common sense and practical requirements in terms of the letter and spirit of the statute,”.

To apply MCOCA in a case, authorities must first determine whether the fundamental and threshold requirements set forth in Section 2(1)(d), (e), and (f) are met.

“It is not in doubt that the provisions of MCOCA need to be strictly construed and for their application, an unlawful activity has to fall within the periphery of organised crime….So far as the applicability of the rule of strict construction qua MCOCA is concerned, it being a special penal statute, this much is clear that no one is to be made subject to this law by implication or by presumption; and all doubts concerning its application would, ordinarily, be resolved in favour of the accused,”

The rule of strict construction, however, cannot be applied in such a way that renders the statute itself nugatory, the Court stated.

“In other words, the rule of strict construction of a penal statute or a special penal statute is not intended to put all the provisions in such a tight iron cast that they become practically unworkable, and thereby, the entire purpose of the law is defeated,”.

However, the appellant’s claim that the use of violence is required to trigger Section 2(1) (e), which deals with organised crime, was rejected by the court.

In response to the argument that the authorities must examine only “pecuniary benifit” when utilising this statute, the bench noted it may also be “gaining undue economic or other advantages.”

“The frame of the proposition that the object ought to be gaining pecuniary benefit or other ‘similar’ benefit is not correct as it misses out the specific phraseology of the enactment which refers to undue economic or other advantage apart from pecuniary benefit,”.

It further cited a full bench decision of the Bombay High Court in Jagan Gagansingh Nepali @ Jagya, in which it was found that a person perpetrating a crime could gain a strong hold or authority in society or even in the syndicate itself, even if the profit is not immediately monetary.

The bench further considered the fact that all of the charges against the appellant, whether pending or closed, entailed crimes against human life and property, rioting, and the use of lethal weapons to disrupt the peace.

Abhishek had also contended that he had been acquitted in one of the prior cases against him, while the Bombay High Court had quashed the proceedings in the other.

The bench responded by noting that in the acquittal case, the witnesses had become hostile and the primary complainant had failed to appear for deposition. The other case was dismissed due to cross-complaints, and a settlement was reached as a result.

“The submissions on behalf of the appellant for consideration of his case because of application of stringent provisions impinging his fundamental rights does not take away the impact of the blameworthy conduct of the appellant. Any claim towards fundamental rights also cannot be justifiably made without the person concerned himself adhering to and submitting to the process of law.”

As a result, the appeal was dismissed.