by By Justuce Bench
in News
Reading Time: 6 mins read
0
0 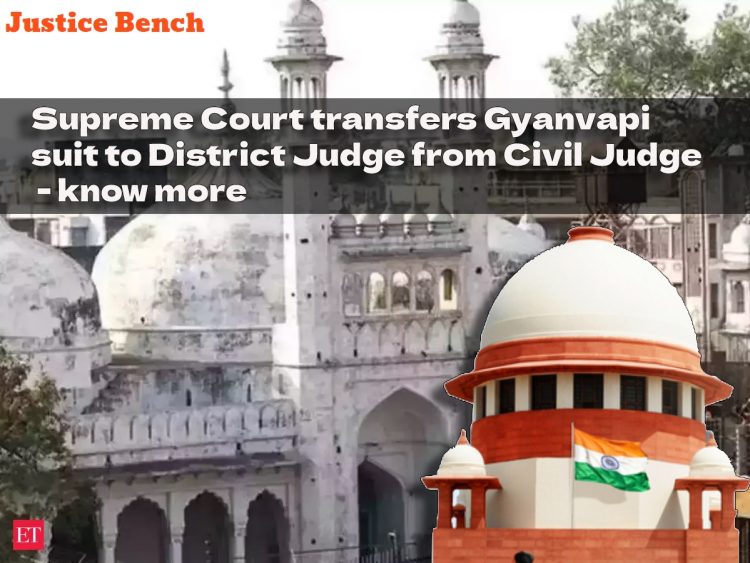 The Court also said that its interim order of May 17 protecting Shivling and allowing Muslims to worship at the mosque, shall continue till the maintainability of the suit is decided.

On Friday the Supreme Court ordered the transfer of the civil suit in the Gyanvapi-Kashi Vishwanath dispute to the District Judge who should decide the maintainability. The suite in which Hindus and Muslims have staked claim to worship at the disputed Gyanvapi mosque in Varanasi.

The bench comprising Justices DY Chandrachud, Surya Kant and PS Narasimha observed that an application by the Muslim party under Order VII Rule 11 (challenging the maintainability of the suit) is pending before the civil court.

“Having regard to the sensitivity of this civil suit, this case before the civil judge Varanasi shall stand transferred and be heard by a senior and experienced judicial officer of UP Judicial services. Thus case transferred from Civil Judge (senior division), Varanasi to District Judge, Varanasi. The application filed by plaintiff under O7 R11 CPC shall be decided on priority by the District Judge on transfer of suit,”.

Further, the Court also said that its interim order of May 17 shall continue till the Order VII Rule 11 application is decided.

“Our interim order dated May 17 shall continue to remain till Order 7 Rule 11 Application is decided and thereafter for 8 weeks so that parties aggrieved by district judge order can challenge the same,”.

The apex court on May 17 ordered that the Shivling stated to have been found during the survey of the mosque be protected. The court also lifted the prohibition imposed by a Varanasi court on Muslims from entering the mosque premises.

In its orders passed today, the Court also directed the District Magistrate to make appropriate arrangements for Wazu (washing of feet and hands before offering prayers) at the mosque in consultation with parties.

The Court adjourned the matter and will be heard after the summer vacation.

The appellant the Committee of Management of Anjuman Intezamia Masajid had filed an appeal challenging the Allahabad High Court order permitting a civil court-appointed commissioner in Varanasi to inspect and conduct a survey and videography of the Gaynvapi Mosque over which Hindus and Muslims have laid claims for the right to worship.

On Friday the court heard the matter mentioned by Senior Counsel CS Vaidhyanathan, appearing for the Hindu parties submitted that the appeal has become infructuous since the court commissioner has already conducted the survey.

“Today the SLP is infructuous since all three orders have been complied with. Religious character of the mosque has to be decided. The commission report has to be seen by the court,”.

The bench suggested that the order VII Rule 11 application should be decided by the lower court.

The court further remarked that id suit is decided in favor of the Muslim party, the issue will come to an end.

The bench also suggested that it will sent the matter to a District Judge so that an experienced hand deals with the issue.

“In this this sensitive matter, the suit should be heard by a District Judge. A slightly more seasoned and mature hand (should) hear this. No aspersion on trial judge. He is part of our system. This will benefit all the parties,”.

Senior Counsel Huzefa Ahmadi appearing for the appellant (Muslim party) said that the top court should quash and set aside the Allahabad High Court since it was not in keeping with the Places of Worship Act, 1991.

He submitted that if the top court does not intervene, similar mischief will be raked up as regards other structures too.

“Till that application (Order VII Rule 11 application) is decided what will happen in the ground? You have to see how this case is being used for 4 or 5 mosques across the country. This will create public mischief which the Act wanted to avoid. taste of the pudding is in the eating. If today this is allowed, and tomorrow they say that another mosque was temple,”.

The court cannot suo motu decide on the maintainability of a suit, said the supreme court.

“The moment you say that framing of suit is barred under 1991 act then you are raking Order VII Rule 11 point. You are not arguing that application before the supreme court, but you say that commission was void ab initio. but the issue is to accept this argument, it is for us to comment on maintainability of the suit. Supreme Court cannot say suo motu it will decide maintainability of the suit. We have to follow due process of law,”.

the court said it will keep pending the appeal before it till the Order VII Rule 11 application is decided.

“There is another way. You have challenged the appointment of commission. If you succeed under Order VII Rule 11, all comes to an end. If you fail in the application, we can post this SLP a little later after the vacation, so that in case you fail this appeal will be pending,”.

The Court has remarked pertinently that ascertainment of the religious character of a place of worship is not barred under the Places of Worship Act.

“Ascertainment of religious character is not barred under Section 3 of the 1991 Act. Suppose there is a Parsi temple and there is a cross in the corner of the area. Does the presence of Agyari make the cross Agyari or Agyari christian. This hybrid character is not unknown,”.

“It is strongly in dispute,”.

the lawyer for Hindu parties responded

“You may think so. If this is entertained, then the 1991 Act may be only a dead letter. This is the controversy the Act wanted to avoid,”.

The Hindu parties filed suit claiming that the Gyanvapi Mosque houses Hindu deities and that Hindus should be allowed to worship and do puja at the site and the appeal arises from the same suit.

The Varanasi court had appointed a court commissioner to conduct a survey and videography of the site. This order was challenged before Allahabad High Court, which dismissed the appeal on April 21.

Subsequently, the present appeal was filed before the top court.

The advocate commissioner had meanwhile conducted the survey and submitted his report before the civil court.