Supreme Courts rules pension is a continuing cause of action; pension arrears cannot be dismissed on the grounds of delinquency 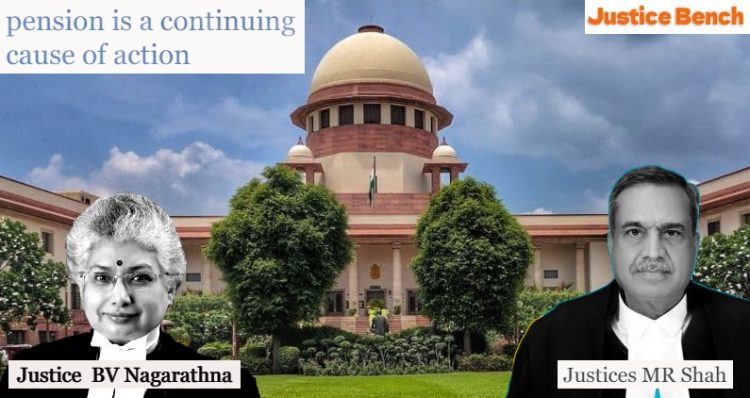 pension is a continuing cause of action

The Supreme Court bench comprising Justices MR Shah and BV Nagarathna while hearing the matter of ML Patil (Dead) through LRs v. State of Goa and Another held that Pension is a continuing cause of action, and arrears of pension cannot be dismissed on the basis of a delay in filing a petition.

A division bench is considering an appeal against the Bombay High Court’s decision to deny the appellants’ pension arrears.

The appellants had challenged the respondents’ action in superannuating/retiring them at the age of 58 before the Bombay High Court. The appellants claim that the retirement age was 60 years.

The appellants were recruited into service prior to their appointment date, as required by the Goa, Damn and Diu Reorganization Act, 1987 (Reorganization Act), which established the state of Goa and the Union Territory of Daman and Diu.

It was argued that the government’s action in superannuating them was in violation of Section 60(6) of the Reorganization Act, which stated that the conditions of service in effect immediately before the appointed day could not be changed to the detriment of employees hired before that date unless the Central Government approved it.

Despite the fact that the petitioners’ retirement age was 60 years and they were wrongfully superannuated at the age of 58 years, the High Court dismissed the appeal on the grounds that the appellants had contacted the Court late.

As a result, the petitioners will not be entitled to any pay or pension arrears.

Angry, the appellants filed the current appeal with the Supreme Court.

The Supreme Court stated that the High Court made an error in ruling that the appellants were not entitled to any pension arrears.

It was of the opinion that the High Court was correct and/or appropriate in denying the appellants any salary for the two additional years if they had continued in service on the basis of delay. However, in the case of the pension, it is a continuing cause of action, and the arrears of the same cannot be rejected.

The highest court stated that there was no reason for refusing the appellants’ pension arrears.

“As far as the pension is concerned, it is a continuous cause of action. There is no justification at all for denying the arrears of pension as if they would have been retired/superannuated at the age of 60 years. There is no justification at all by the High Court to deny the pension at the revised rates and payable only from January 1, 2020. Under the circumstances, the impugned judgment and order passed by the High Court is required to be modified to the aforesaid extent,”

While partially accepting the appeal, the court ordered that the appellants be entitled to pension at the increased rates as soon as they reach the age of 60, and that any pension arrears be paid to them.

As a result, the ruling of the Bombay High Court was reversed, and the appeal was partially granted.