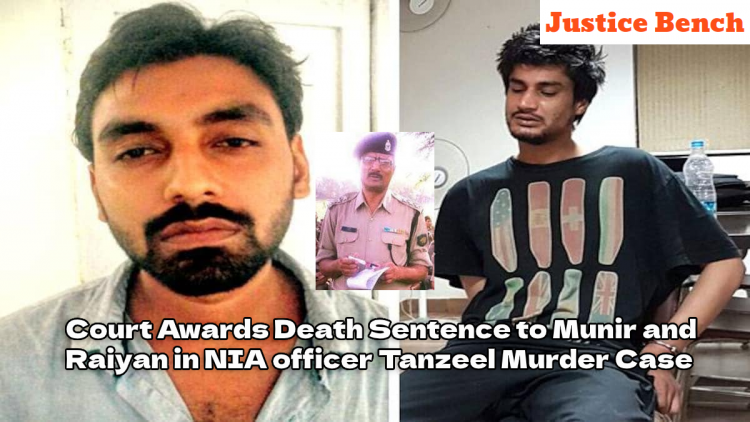 On 20th May 2022 in the case of Tanzeel Khan vs. State of Madhya Pradesh and others, (2013), Judge Dr. Vijay Kumar Talian of ADJ Gangster Court 5 sentenced to death to the main accused in the murder of NIA Deputy SP Tanjeel in Bijnor district, Munir and Raiyan, after the court found both accused guilty.

Subsequently, the court acquitted the other accused, TanzeemJenny, and Rizwan, during the hearing of this case. Munir and Raiyan, the main accused, murdered NIA officer Tanzeel and his wife Farzana on April 2, 2016.

The ADJ Gangster Court judge Dr. Vijay Kumar previously sentenced gangster Munir to ten years in prison and a fine of one lakh rupees for instilling fear in Uttar Pradesh, Delhi, and other states by committing serious crimes such as murder and robbery. Raiyan, Munir’s accomplice, was also sentenced to five years in prison and a Rs 50,000 fine.

On Friday the court convicted both of the accused in the murder of the NIA officer and his wife. The court decided to announce the sentences for both of the defendants in the case and were sentenced to death in court today.

As per reports, Only people involved in the case were allowed inside the court after police conducted a check in the morning, It was stated that let us remind you that the police have been tight-lipped about the sentencing since the morning. The police were on high alert even inside the court.

Munir and his associates murdered NIA Deputy Superintendent Tanzeel Ahmed and his wife Farzana, The accused had a history of making money by committing heinous crimes such as murder, robbery, and dacoity in the district of Bijnor and other states. Simultaneously, Rs 95 lakh was stolen from a Punjab National Bank cash van in Dhampur.

Munir is the subject of 35 criminal charges.

The police have reported that 35 cases have been filed against Munir. Other states have filed charges against Munir, including Bijnor, Delhi, and Aligarh. Munir has 13 murders, robberies, and other crimes registered in the Bijnor district alone.

The killers shot Tanzeel Ahmed, the National Investigation Agency’s Deputy Special Prosecutor. To enter and exit the building, Tanzeel Ahmed received 33 bullet wounds, while his wife received six. The massacre was carried out with the most advanced weapons available. Deputy SP’s son Shahbaz and daughter Jimnish saved their lives by entering under the seat. The entire massacre took less than two minutes to complete.

Around one o’clock at night, Tanzeel Ahmed and his brother Ragib emerged from the banquet hall in their automobiles, and Munir and Rayyan parked their bikes behind Tanzeel’s car. Munir then opened fire on Tanzeel Ahmed, the car’s driver, as soon as he had the chance.

After firing from the pistol, Raiyan snatched the revolver and shot bullets. They both raced towards Sahaspur as they noticed Ragib’s automobile approaching from behind. Munir snatched his bike and backpack from Jaini and departed alone in the middle of the night, according to Rayyan. They went back to their different houses after that.

Tanzil had previously misbehaved with Rayyan’s uncle, but according to Rayyan, no action was taken against him. As a result, vengeance consumed him, and he sought to extract vengeance on Tanjil. The accused in this case was sentenced to death in court.

Tanzeel’s wife, Farzana Khatoon, worked as a government teacher at Government Girls Senior Secondary School in Batla House, Jamia Nagar, Delhi. Jimnish, Jimnish’s 16-year-old daughter, was a student at the time at Srinivaspuri’s Cambridge School. At the time, he was delivering his eighth paper. The son, Shahbaz, was 12 years old and in seventh grade.