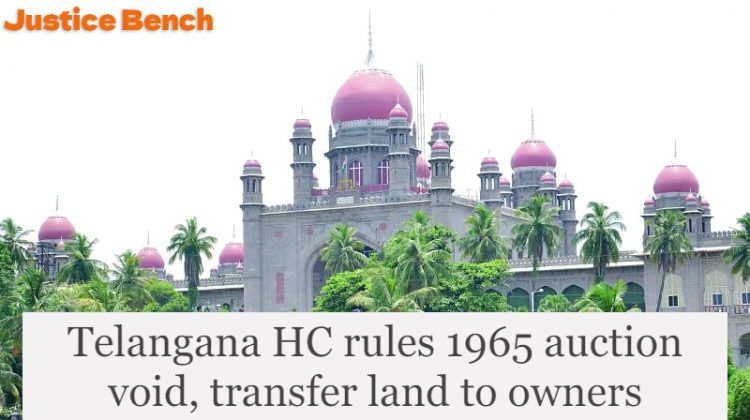 The division bench of the Telangana High Court comprising Chief Justice Satish Chandra Sharma and Justice K. Lakshman recently cancelled the auction and transactions made upon the property which was conducted in 1965. The court also set aside the transactions and alienations made upon such properties, since they had been auctioned.

In 1958 and 1964, the government attempted to auction the land after seizing it. The highest bidders failed to credit the bid sum of Rs.2,725 on two occasions. Due to a lack of interest in purchasing the properties, the government used Board Standing Order No. 45 to purchase the agricultural land for ten and the house for fifty.

After that, in 1979, the government awarded a piece of land property of 9 acres and 6 guntas to an ex-serviceman, who later sold part of it to the GITAM University.

In 1995, Rama Goud’s legitimate heirs filed a lawsuit in the High Court, contesting the 1965 auction. At the time of the auction, they claimed to be minors. According to them, the government had auctioned 14 acres and 58 guntas of their ancestral land, but Rama Goud had merely mortgaged 11 acres and 25 guntas.

Meanwhile, they paid off Rs.3,400 in tax arrears on March 30, 1996, when the excise department offered to write off the interest and penalties if the principal amount was paid, and they consented to have their agricultural land and house returned to them. They said they just learned of the government’s “fraud” in 1995 and raised concerns about the auction.

The court found that the government authorities cheated the public by auctioning the land and then selling it. To begin with, the authorities failed to notify the landowner before to auctioning the land plot. Despite the fact that the auction took place in 1965, the name of Rama Goud appeared in income records in both the pattadar and possessor columns until 1973.

The government’s approach for handing away the properties for just ’60 was criticised by the bench. Furthermore, it had not paid the amount due to the excise agency for Rama Goud’s rental arrears, who had died in the meantime. The excise officers then allowed Rama Goud’s legitimate heirs to pay the arrears. The court also dismissed the revenue officials’ arguments.

The properties will now be returned to Rama Goud’s legitimate heirs.