The Allahabad High Court has issued a contempt notice to an attorney for speaking to a district judge in an “ugly and harsh” manner. 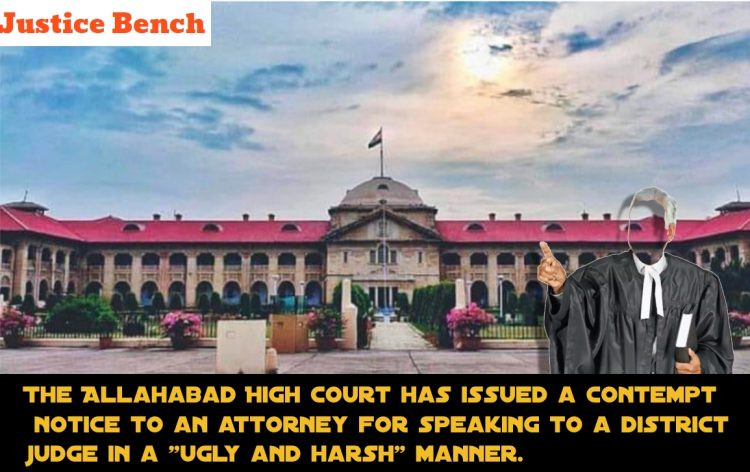 The Allahabad High Court has issued a contempt notice to an attorney for speaking to a district judge in a "ugly and harsh" manner.

the Court while hearing the case of State Of UP v. Sharad Kumar Gupta observed that the conduct of the advocate scandalises or tends to scandalise and lower the authority of the court concerned.

An lawyer was recently served with a contempt notice by the Allahabad High Court for using “ugly and harsh words” in the court of the District Judge, Hardoi Motor Accident Claims Tribunal.

Judge Rabindra Kumar filed the contempt petition in the High Court after receiving a letter from Advocate Sharad Kumar Gupta in December 2021, complaining about his behaviour during a case hearing. Gupta allegedly “got enraged and screamed harsh comments not befitting the dignity and majesty of the Court” during the proceedings. As a result, the proceedings were stalled and disrupted.

A Court of Justice In the petition, Arvind Kumar Mishra-I and Manish Mathur issued notice, opining,

“We upon careful perusal of entirety of the case find it a case for interference considering the entirety of this case, dignity and honour of the judiciary and prima facie, find upon perusal of the report dated 10.12.2021 that the act committed by Mr. Sharad Kumar Gupta, Advocate comes within the purview of Criminal Contempt as defined under Section 2(c) of the Contempt of Courts Act, 1971 since it scandalises or tends to scandalise and lower the authority of the Court concerned.”

The advocate was so summoned to appear before the High Court to explain why no contempt of court proceedings should be brought against him.

On July 15, the case will be heard again.