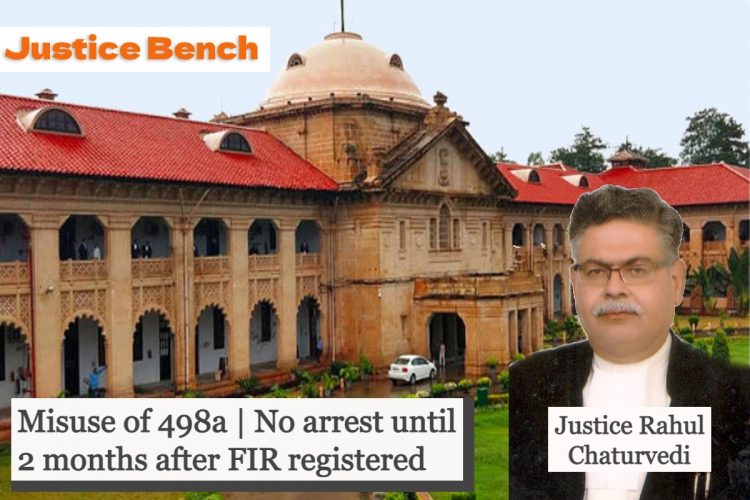 In the case of Mukesh Bansal v State of Uttar Pradesh, the Allahabad High Court bench of Justice Rahul Chaturvedi issued safeguards on Monday to prevent the misuse of Section 498A of the Indian Penal Code (IPC), in light of the growing trend of slamming the husband and his family members with broad allegations.

The Court ordered that no arrest or coercive action be taken against the accused for two months after the filing of a First Information Report (FIR) under the provision, and that the case be referred to a Family Welfare Committee during that time (FWC).

“It is made clear that after lodging of the F.I.R. or the complaint case without exhausting the “Cooling-Period” of two months, no arrest or any coercive action shall be taken against the husband or his family members,”

The Court ordered the formation of FWCs and specified that they must be functioning within the next three months.

“Only those cases which would be transmitted to FWC in which Section 498-A IPC along with, no injury 307 and other sections of the IPC in which the imprisonment is less than 10 years,”

The court was hearing three people’s appeals of a session court order that had denied their discharge applications.

The wife filed a complaint against her husband and in-laws for cruelty, malicious insult, criminal intimidation, attempted murder, and offenses of the Dowry Prohibition Act.

Wife said she was pressured for more dowry, that her father-in-law and brother-in-law wanted sexual favours from her, that she was trapped in the bathroom by her husband, that they pressured her to abort her pregnancy, and that her husband tried to have unnatural intercourse with her.

The Court criticised the nature and phrasing of the wife’s charges, stating that she had “vomitted snide before the court” and had “exaggerated the incident many times.”

“The graphic and vivid descriptions of the incident without any shame or hitch of any sort which, speaks out volume of mental condition and amount of venom and poison in the mind of the informant,”

The Court stated that filing abhorrent FIRs is a common practise nowadays in circumstances of matrimonial conflict, and that this case appeared to be a repeat of that pattern.
It also took into account the wife’s frank statement in her application, in which she stated that she would refuse a medical examination because she had not been physically injured. Apart from a mark on her neck, which showed that her husband attempted to strangle her, she had no other serious injuries.

After reviewing the evidence, the Court concluded that the FIR was nothing more than a venomous canard in which the informant had smeared filth on revisionists in a rash manner, oblivious to the far-reaching implications, but was unable to produce any documentary evidence to substantiate the allegations.

“Her psyche and amount of venom in the mind of the informant goes to show that in order to take revenge from her husband and in-laws, she has gone to any extent, crossing all the limits of decency,“

While discussing the claims against the father and brother-in-law, the court stated that it was highly implausible and hence difficult to comprehend the allegations that they demanded sexual favours from the daughter-in-law in traditional Indian homes.

“In our traditional Indian family, where they are residing in a joint family with unmarried son, it is highly improbable and difficult to digest the allegations of demanding sexual favours from her daughter-in-law by father-in-law or brother-in-law,“

In addition, Justice Chaturvedi highlighted the function of lawyers in marital cases. The judge described the FIR in the case as “always abhorring, replete of muck and filth.”

In this case, the court chose to disregard the wife’s explicit and distressing allegations after getting legal counsel.

As a result, the in-laws’ revision applications were granted. However, the husband’s request for a revision was denied.

In regards to the abuse of Section 498-A, the Court stated that if such egregious and irresponsible abuse continues, the customary aroma of our age-old institution of marriage will utterly vanish.

As a result, the Court issued the following instructions:

(ii) Only those cases which would be transmitted to FWC in which Section 498-A IPC along with, no injury 307 and other sections of the IPC in which the imprisonment is less than 10 years;

(iii) After lodging of the complaint or the FIR, no action should take place without concluding the “Cooling-Period” of two months. During this “Cooling-Period”, the matter may be referred to Family Welfare Committee in each districts;

(iv) Every district shall have at least one or more FWC (depending upon the geographical size and population of that district constituted under the District Legal Aid Services Authority) comprising of at least THREE MEMBERS. Its constitution and function shall be reviewed (25) periodically by the District & Sessions Judge/Principal Judge, Family Court of that District, who shall be the Chairperson or Co-chairperson of that district at Legal Service Authority;

(v) The said FWC shall comprise of the following members :- (a) a young mediator from the Mediation Centre of the district or young advocate having the practices up to five years or senior most student of Vth year, Government Law College or the State University or NLUs having good academic track record and who is public spirited young man, or; (b) well acclaimed and recognized social worker of that district having clean antecedant, or; (c) retired judicial officers residing in or nearby district, who can devote time for the object of the proceeding or; (d) educated wives of senior judicial or administrative officers of the district.

(vi) The member of the FWC shall never be called as a witness;

(vii) Every complaint or application under Section 498A IPC and other allied sections mentioned above, be immediately referred to Family Welfare Committee by the concerned Magistrate. After receiving the said complaint or FIR, the Committee shall summon the contesting parties along with their four senior elderly persons to have personal interaction and would try to settle down the issue/misgivings between them within a period of two months from its lodging. The contesting parties are obliged to appear before the Committee with their four elderly persons (maximum) to have a serious deliberation between them with the aid of members of the Committee;

(viii) The Committee after having proper deliberations, would prepare a vivid report and would refer to the concerned Magistrate/police authorties to whom such complaints are being lodged after expiry of two months by inserting all factual aspects and their opinion in the matter;

(ix) Continue deliberation before the Committee, the police officers shall themselves to avoid any arrest or any coercive action pursuant to the applications or complaint against the named accused persons. However, the Investigating Officer (IO) shall continue to have a peripheral investigation into the matter namely preparing a medical report, injury report, the statements of witnesses;

(x) The said report given by the Committee shall be under the consideration of IO or the Magistrate on its own merit and thereafter suitable action should be taken by them as per the provision of Code of Criminal Procedure after expiry of the “Cooling-Period” of two months;

(xi) Legal Services Aid Committee shall impart such basic training as may be considered necessary to the members of Family Welfare Committee from time to time(not more than one (26) week);

(xii) Since, this is noble work to cure abrasions in the society where tempos of the contesting parties are very high that they would mellow down the heat between them and try to resolve the misgivings and misunderstanding between them. Since, this is a job for public at large, social work, they are acting on a pro bono basis or basic minimum honorarium as fixed by the District & Sessions Judge of every district;

(xiii) The investigation of such FIRs or complaint containing Section 498A IPC and other allied sections as mentioned above, shall be investigated by dynamic Investigating Officers whose integrity is certified after specialized training not less than one week to handle and investigate such matrimonial cases with utmost sincerity and transparency.

(xiv) When settlement is reached between the parties, it would be open for the District & Sessions Judge and other senior judicial officers nominated by him in the district to dispose of the proceedings including closing of the criminal case.