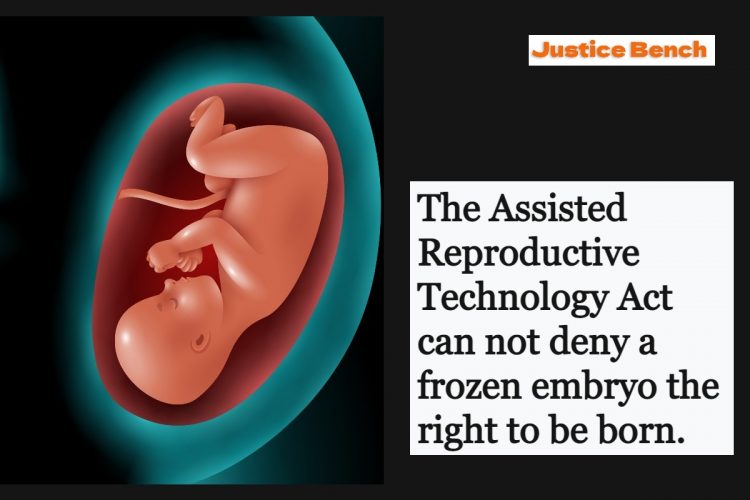 The Assisted Reproductive Technology Act can not deny a frozen embryo the right to be born.

In the case of Rakhi Bose & Anr. v. Union of India & Ors., the Kerala High Court bench led by Justice VG Arun ruled on Wednesday that the provisions of the Assisted Reproductive Technology (Regulation) Act, 2021 cannot be used to stifle the right of an embryo to develop into a foetus and then be born (the Act)

The court held that none of the provisions of the Act, whose primary goal is to prevent the misuse of assisted reproductive technologies, frustrate either the parents’ rights to conceive and bear children or the right of the life in the embryo.

“Apart from the aspirations of the first petitioner (mother) to conceive and the second petitioner (father) , to beget a child, the right of the life inside the embryo, which is kept frozen for the past 8 years, to develop into a fetus and be born, cannot be stultified by relying on a provision which has no application. The primary objective of the Act is the regulation and supervision of the assisted reproductive technology clinics and banks, by preventing misuse and ensuring safe and ethical practice of assisted reproductive technology services. The Act is not intended to create difficulties for persons opting assisted reproductive procedure,“

The Court Held in its order

The Court was considering a petition filed by a couple who decided to use assisted reproductive technologies because they had struggled to conceive for a long time.

They wanted to transfer four fertilised embryos that were currently housed in one hospital to a different facility of their choice.

The Act entered into force in the interim, and the first hospital refused to transfer the embryos on the grounds that it violated the Act’s provisions.

The petitioners sought orders to transfer the embryos and a declaration that they were qualified to receive their own frozen embryos as a result, which led them to file a case with the High Court.

Speaking on behalf of the petitioners, Senior Advocate Abraham Vakkanal argued that because the National and State Boards envisioned by the Act have not yet been established, the petitioners are unable to approach the Board for approval to carry out the transfer.

The petitioners will suffer undue hardship and prejudice if the transfer is not allowed because the maximum time an embryo can be preserved is ten years, and eight years have already passed.

“Life inside a human embryo remains frozen, awaiting its opportunity to be born as a child to its parents; the petitioners. Meanwhile, the State brings out a well meaning legislation viz, the Assisted Reproductive Technology (Regulation) Act, 2021 . Will the new enactment have an impact on the Assisted Reproductive procedure, which the petitioners now want to continue, is the question.“

The petition’s main point of contention, summarised the Court.

The Court surmised that Section 29 of the Act was likely the reason the request for transfer was denied, but Section 29 does not prohibit the kind of transfer that the petitioners requested.

As a result, the Court directed the hospitals to ensure quick and secure transfer and storage of the petitioners’ embryos.