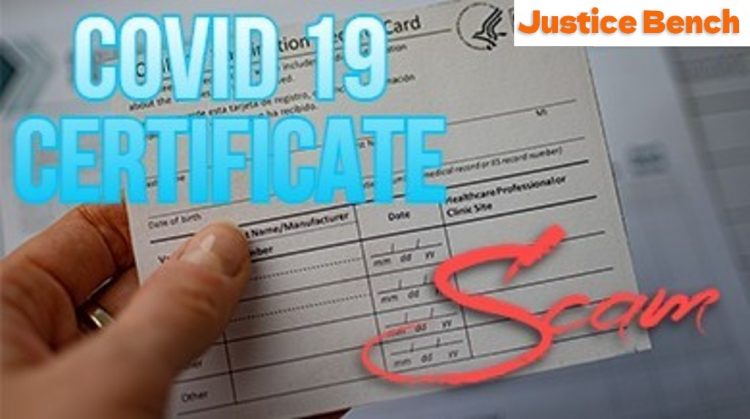 The Bombay High Court has refused to grant anticipatory bail to a pregnant nurse accused of fabricating vaccination certificates.

The Bombay High Court bench at Aurangabad comprising Single-judge SG Mehare in the case of Shahenaz Afsar Shaikh vs State of Maharashtra, recently refused to grant anticipatory bail to a pregnant nurse booked for fabricating over 200 false vaccination certificates.

The nurse had submitted an anticipatory bail application with the vacation court, requesting protection from arrest in connection with a First Information Report (FIR) filed against her for issuing nearly 200 false vaccination certificates.

According to the judge, the applicant appears to have gone against the State government’s policy of containing the dangerous Covid-19 virus.

“Serious issue of Covid19 pandemic has been faced world over. The State at several levels has taken care to prevent the spread of such life threatening disease. The government was dependent on the Medicine Department. Unless the vaccine is injected no certificates should have been prepared. The serious allegation of issuing around 200 false vaccination certificates have been levelled against the applicant. The conduct of the applicant is apparently against the government policy of preventing the spread of Covid19,”

The nurse argued in her defence that she was in her ninth month of pregnancy and would be giving birth soon, so she should be protected from arrest. She even admitted that she lacked the technical know-how to create fake vaccination certificates.

The judge, on the other hand, stated that the investigation officer would have to look into how many fraudulent vaccination certificates the applicant nurse had provided.

“The applicant has acted against the interest of the public at large. The allegations levelled against her are apparently serious. Unless her custodial interrogation is made the probe may not be completed to unearth the truth,”

While stating the above, Justice Mehare even refused to consider the pregnancy plea

On May 30, another Bombay High Court bench, presided over by Justice Milind Jadhav, granted anticipatory bail to a pregnant woman accused of aiding and abetting her own husband’s suicide. The judge in that instance stated that it is the court’s responsibility to safeguard the pregnant mother and her foetus from unnecessary stress.

The defendants were represented by lawyers Sohail Shaikh and Dhanraj Ingole, while the state was represented by additional public prosecutor R D Sanap.

On June 10, the case will be heard again.