The court in Varanasi will rule today on whether to consider the survey report first. 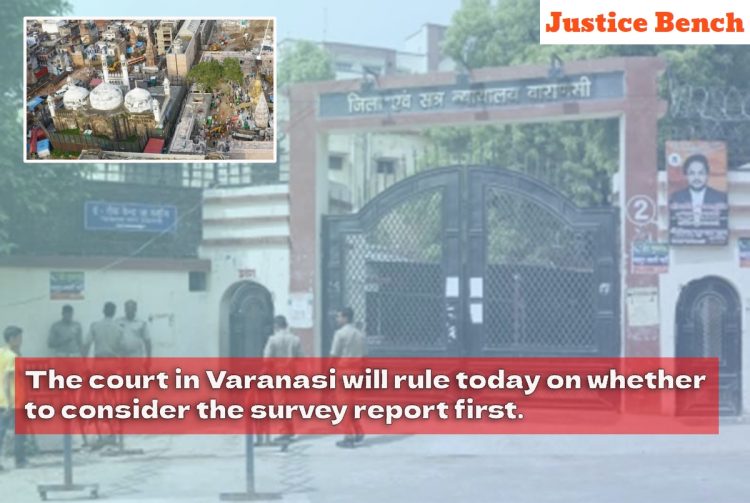 The court in Varanasi will rule today on whether to consider the survey report first.

The Hindu parties yesterday requested that objections to the advocate commissioner’s report, which included videography and a survey of the Gyanvapi Mosque, be heard first.

A Varanasi court hearing the Gyanvapi Mosque-Kashi Vishwanath Temple dispute will determine today whether to consider the advocate commissioner’s survey report of the Mosque and invite objections to it before hearing the Muslim party’s appeal regarding the suit’s maintainability.

After the Hindu parties today urged that the objections to the survey report by advocate commissioner who had videographed and conducted a survey of the Gyanvapi Mosque be heard first, the Bench comprising District and Sessions Judge Dr. AK Vishvesha would issue a decision tomorrow on this limited aspect.

The lawsuit is a civil complaint brought by Hindu worshippers demanding the right to worship inside the Gyanvapi Mosque, which was once a Hindu temple and still housing Hindu deities.

The Muslim parties have disputed the suit’s legality, claiming that the Places of Worship Act of 1991, which was passed during the Ram Janmabhoomi campaign, aims to conserve the status of all religious structures as they were on August 15, 1947.

Section 4 of the Act says that a place of worship’s religious nature must remain the same as it was on August 15, 1947. It prevents courts from hearing cases involving institutions of worship. The rule also specifies that such matters that are currently ongoing in courts will be dismissed.

The Supreme Court, on the other hand, transferred the civil case to the District Judge.

The Hindu parties have now argued in front of the District Court that the suit’s maintainability cannot be determined without considering the survey report because the character of the religious edifice is at issue.

On this limited issue, the Court is expected to rule tomorrow.

The plaintiffs in this case are ten people who are nearest friends of the deities who are said to exist within the mosque’s confines.

They believe that a Jyotirlingam in the ancient temple was desecrated by Mughal monarch Aurangzeb in 1669, but that Maa Shringar Gauri, Lord Ganesh, and other deities survived.

The Gyanvapi Mosque was built after the ancient temple of Lord Adi Visheshwar was partially demolished, according to the plaint filed by attorneys Hari Shankar Jain and Pankaj Kumar Verma.