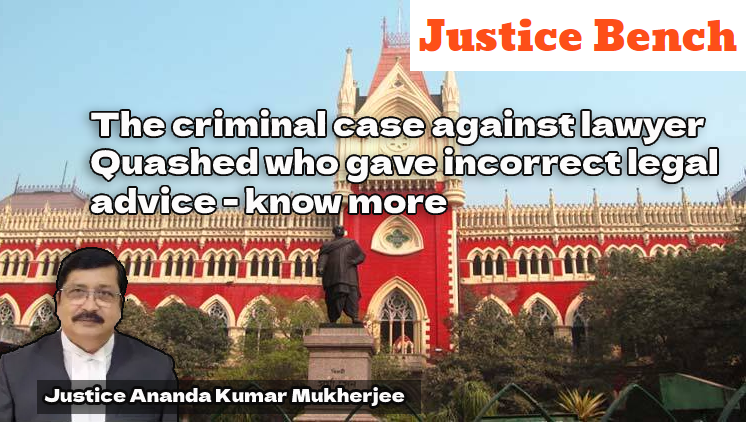 There is no allegation or material in the charge sheet that the petitioner made any wrongful gain from the co-accused persons or he had any pecuniary benefit for preparing a wrong search report in favour of the company,

Recently, The High Court of Calcutta in Bhaskar Banerjee v CBI case quashed criminal proceedings against an advocate accused of providing false and improper legal advice that was instrumental in sanctioning a bank loan to a now Non-Performing Asset (NPA)-turned company.

The Bench Comprising of Justice Ananda Kumar Mukherjee found that there were no imputations in the charge sheet or the first information report (FIR) to reflect that the petitioner advocate had entered into an agreement to do any illegal act.

The high court said that the submission of the forged documents to the bank and the same were given to the petitioner for consideration, who submitted a wrong verification report, did not lead to the conclusion that the petitioner entered into a criminal conspiracy to submit a false report.

The Observed that “There is no allegation or material in the charge sheet that the petitioner made any wrongful gain from the co-accused persons or he had any pecuniary benefit for preparing a wrong search report in favour of the company,”.

The Court while quashing the criminal proceedings against the petitioner, relied on the Supreme Court decision in Central Bureau of Investigation, Hyderabad v K Narayana Rao, in which it was held that,

“Merely because his opinion may not be acceptable, he cannot be mulcted with the criminal prosecution, particularly, in the absence of tangible evidence that he associated with other conspirators. At the most, he may be liable for gross negligence or professional misconduct if it is established by acceptable evidence and cannot be charged for the offence under sections 420 and 109 IPC along with other conspirators without proper and acceptable link between them.”.

Based on the above supreme court citation the case is quashed.

The counsel for Petitioner